Why Are We Baiting the Bear? 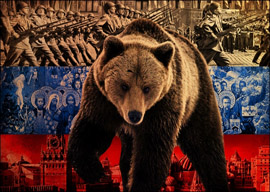 Is the Senate trying to reignite the Cold War?

If so, it is going about it the right way.

Before departing for a five-week vacation, the Senate voted to declare Abkhazia and South Ossetia to be provinces of Georgia illegally occupied by Russian troops who must get out and return to Russia.

The Senate voice vote was unanimous.

What is wrong with Senate Resolution 175?

Just this. Neither Abkhazia nor South Ossetia has been under Georgian control for 20 years. When Georgia seceded from Russia, these ethnic enclaves rebelled and seceded from Georgia.

Abkhazians and Ossetians both view the Tblisi regime of Mikhail Saakashvili, though a favorite of Washington, with contempt, and both have lately declared formal independence.

Who are we to demand that they return to the rule of Tblisi?

“Why are we siding with Georgia, a nation of 5 million, against a Russia that seems to be on the side of self-determination?”

In co-sponsoring S.R. 175, Sen. Lindsey Graham contended that “Russia’s invasion of Georgian land in 2008 was an act of aggression, not only to Georgia but to all new democracies.”

This is neocon propaganda. Russian troops are in those enclaves because in August 2008 Georgia invaded South Ossetia to re-annex it, and killed and wounded scores of Russian peacekeepers. Tblisi’s invasion brought the Russian army on the run, which threw the Georgians out and occupied slices of Georgia itself.

While the Russian troops withdrew from Georgian territory, they remained in Abkhazia and South Ossetia as a deterrent to Saakashvili, whose agents have been working Capitol Hill to push the United States into a confrontation with Russia on Georgia’s side.

S.R. 175, the work of Graham and Sen. Jeanne Shaheen, declares it to be U.S. policy “to recognize Abkhazia and South Ossetia as regions of Georgia occupied by the Russian Federation.” But the Russians are far more welcome there than are the Georgians.