Why College Athletes Should Get Paid More Than Teachers 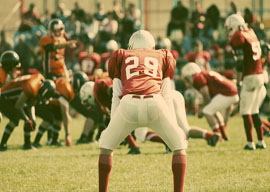 To say that college point guards should be paid more than middle school social-studies teachers might seem like a controversial statement, but it’s essentially the same as saying that movie stars should get paid more than janitors. Not to proverbially defecate all over the custodial arts, but nobody thinks celebrities should get paid less than people who mop up their children’s barf.

That’s what college athletes are, celebrities”celebrities who bring in millions of dollars to their schools, in videogames, merch, sports media, etc. They”re pros in every sense of the word. Yet they”re prohibited from taking any sort of payment whatsoever. All they”re allowed to get is free cafeteria food and unlimited gender-studies classes.

Whether these athletes should get some sort of compensation has been a hotly contested debate lately. Make-believe gambling sites like DraftKings are getting hammered with lawsuits. Videogame company EA Sports just settled with a disgruntled ex”NCAA athlete for $60 million. But after the lawyers leech out their cut, that only leaves about $1,200 per athlete”a piddling sum for being the concussed cause cÃ©lÃ¨bre.

I entertained this debate a few years ago and suggested to a friend that athletes just might be getting the shaft on this whole free-college thing, and that they shouldn”t be treated like criminals for taking a handshake full of C-notes from a booster or a sponsor. To which he replied, “Bullshit. Pay teachers.”

This is actually a very interesting comparison to make”on one hand you have a group of high-performing individuals who work their asses off for three years in hopes of landing a paying gig doing what they love. On the other you have a troop of union-galvanized milquetoasts who let pencil-pushing administrators dictate their lesson plans. Sure, there are a handful of good ones, but teachers are a group with far more than its fair share of bad apples. And like college athletes, they also see a major career change after three or four years”they get tenured with paychecks for life.

Despite the latter group being, by definition, responsible for our nation’s declining intellect, “education” remains this heartwarming term”an ethereal concept nobody can disparage or even question.

To complain that both college athletes and American educators are undercompensated is to acknowledge that “an education” is a meaningless platitude. I have some degrees, so do lots of people. We all have “an education,” singular? That’s stupid.

I think it’s time we treat teachers the same way we treat NCAA athletes. From now on, all new teachers should start as three-year apprentices. Like college athletes, they”ll get room and board, and a bit of mentorship and coaching, but otherwise be left to fend for themselves. In hopes of landing a gig in a big-league science classroom or a professional lecture hall, aspiring teachers will devote themselves tirelessly to proving their worth. And after the three years are up, we”ll have a draft where the top 2% (only about 1.6% of college athletes go pro) of performers will be selected for teaching jobs, which will now pay a minimum salary of $1 million. Of course, this means that the vast majority of these ex””teacher athletes” will end up where they belong”emptying trash cans at Denny’s or doing seasonal work as chairlift operators at ski resorts. If this makes you uncomfortable, you might ask yourself why you value your fantasy-football quarterback over your kid’s second-grade teacher.