Why I Support Spanking 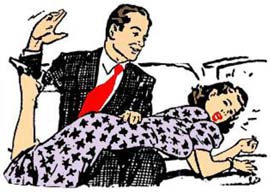 For those who still try to draw parallels between the Tea Party and the Occupy movement, allow me to explain:

There. End of essay.

OK, fine. I’ll elaborate. While the two movements may intersect in some very minor way when it comes to corporate cronyism with the government, they are polar opposites in their conceptions, purposes, logic, and prescriptions. The Tea Party ultimately is a taxpayer revolt. It was born initially of extreme anger and frustration with a government that largely created a horrible set of economic circumstances—primarily through the encouragement of bad behavior—and then wanted to bail out the corrupt industries and companies with money from the people who worked hard and played by the rules. It was a response to years of Constitution-trampling, profligate government spending, cronyism, and backward economic thinking.

The Tea Party wants drastically smaller, less powerful, and decentralized government that abides by the Constitution and respects the money it confiscates from the individuals it’s supposed to represent.

“There used to be a word for this: Envy.”

In short, the Tea Party represents those who have been taken FROM. Oh, and they found time to protest (largely ignored by the media) during their lunch breaks or on weekends—when they could take time off from WORK.

Meanwhile, if there’s any strain of consistency within the disparate array of freaks, hippies, drug fiends, bobble-headed students-for-life, free-energy dreamers, the lazy, and even those who capably impersonate someone remotely respectable within the Occupy movement, it’s that somebody else has something they want. And they want you to give it up, dammit!

There used to be a word for this: Envy. How many of the other Seven Deadly Sins are roots of their ideology? I was taught as a young lad that if someone else had something I wanted, I had to ask him nicely if I could use it. But if it was his, and if he was kind enough to lend it to me, I’d have to give it back when finished. Or I could do some chores, save up some pennies and dimes, and buy the damned toy myself. (I don’t know how my schoolteacher mother was not banished from the teachers union for such radical views on child-rearing.)