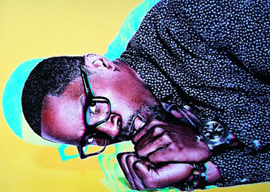 We all had a lot of fun at the American Renaissance bash the other weekend. A disproportionate amount of the fun was provided by vlogger Paul Ramsey, whom I recommend for consideration when your next corporate function, birthday party, or bar mitzvah comes around.

At one point Paul mocked the little knot of anti-racist protestors camped outside the hotel. How, he asked, could this fairly be called “protest”? What did they think they were doing”sticking it to the Man? “Yo, guys: You ARE the Man!”

True enough. Time was, protest meant brave dissenters standing in proud defiance against the massed forces of Establishment power. Nowadays those massed forces believe exactly what the protesters outside our hotel believe, and they propagate it with unflagging zeal through the institutions they control: the media, business, labor, the big political parties, all branches of all federal, state, and municipal government (including the military), and all universities, colleges, schools, kindergartens, and playgroups.

The local media made the point, leaving no doubt that their sympathies were with the protestors, and ours should be likewise if we know what’s good for us. The news announcers put on their most solemn it’s-painful-to-report-this-but-duty-demands faces and quoted the Southern Poverty Law Center scam (twice!) as if it were some kind of impeccable authority, like the International Standards Organization, on metrics of “hate.”

“Racism is considered cool when it’s directed against white people.”

Paul’s remark got me wondering, though. What’s wrong with kids today? Don’t they want to vex their parents? Ãpater la bourgeoisie? Kick against the pricks? Be transgressive?

Mildred: “Hey Johnny, what are you rebelling against?”
Johnny: “Whadda you got?”

Part of the fun of being young used to be the feeling that you were struggling for world mastery against a cohort of closed-minded old farts with a mentality hopelessly stuck in the past. (What Orwell called “pedants, clergymen and golfers.”) Well, if it’s that old-fart cohort you’re looking for, check out your local Ivy League university or cable TV studio. Those places are stuffed to the rafters with them. 1963 is in the past, isn’t it?

And these protesting youngsters believe every single thing the old farts believe! Their transgressions reach no further than their awful beards. The white American middle classes of today may be the most conformist population that ever lived, banking and turning in unison, old and young together, like a school of fish.

Even if these young protestors wanted to be transgressive, they wouldn’t know how. Let’s face it: Being transgressive isn’t what it used to be. Every time I encounter it nowadays, it turns out to be dismally lame.

As an opera fan, I wondered for a while whether I should explore the transgressive delights of Regietheater (“director’s theater”). Then I read Heather Mac Donald‘s survey and decided this was something I could skip without any esthetic loss:

An American tenor working in Germany remembers another Fledermaus with a large pink vagina in the center of the stage into which the singers dived.