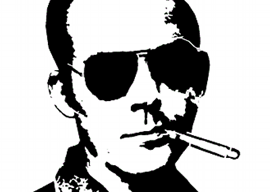 NEW YORK—Leave it to a bunch of self-important self-righteous self-serious journalists to miss the whole point. (That’s what they call themselves. They prefer the French word instead of the word that was used for 150 years—“reporter.”)

I’m talking about the now-infamous White House Correspondents Dinner at which Michelle Wolf lacerated some of the assembled guests, especially Sarah Huckabee Sanders, who had to sit there taking the mean-spirited abuse because she wasn’t given a rebuttal slot. (Don’t call it a roast, as some of Michelle’s defenders did. At a roast, the roastee speaks last. This was a comedy execution.)

Even before it was over, various journalists had taken to the ramparts to either defend or condemn, with the stand-up comedy world chiming in to support Wolf’s acidity and take-no-prisoners style, even if it humiliated people in the room, under the theory that her targets were people who “signed up for it,” while other journalists—mostly the mainstream of the mainstream—chided Wolf for her lack of subtlety and politeness.

I’m actually glad that they self-describe as journalists so that we can more accurately distinguish them from reporters. Whoever these guys are who write the daily pieces about the nation’s doom—probably the same guys who announced the death of objectivity as a standard—have long since identified themselves as grim soldiers of code-word prose pretending to be detached observers. There was a time when nobody wanted the White House correspondent job because you were locked into pool reporting with a pack of loafers happy to regurgitate press releases while watching staged events from behind the purple ropes. Now, blessed with the greatest soap opera in White House history and an Oval Office more leaky than a paper sailboat in a bathtub, everything becomes hedged and restrained. Better not be too anti-Trump lest we be identified as anti-Trumpists. Better to use code words like “unconventional” and “unprecedented” and “roiling” (the word “roiling” has been used more times in the past year than at any time in history, usually to describe some tempestuous event at 1600 Pennsylvania Avenue) or the snide dependent clauses or the deep mining of sources willing to say “unfit for office.” Every time there’s a train wreck, we should scale it back to a fender bender. Every time there’s a truly monumental change—like leaving American embassies all over the world unstaffed and adrift—better to do the story about “structural change in the Trump era.”

“The condemnation of Wolf is wrong, and the praise of Wolf is equally wrong. The villains here are the White House correspondents themselves.”

What these guys needed, at this year’s dinner, was Hunter S. Thompson, not Michelle Wolf, but Hunter is dead and there’s nobody stepping up to claim the gonzo ticket on the press bus.

Look. People. The condemnation of Wolf is wrong, and the praise of Wolf is equally wrong. The villains here are the White House correspondents themselves.

The White House Correspondents Dinner is part of a press tradition more than a hundred years old called the headliners show. There are dozens of these, if not hundreds, in cities and towns all over America, wherever there is a press club or, more commonly, a Headliners Club (hence the name). These are charity events, held once a year, at which the press and local public celebrities come together to do amateur theatricals. I’ve attended a couple dozen of them as a participant, actor, singer, roaster, roastee, and host. I’ve seen editorial writers known for their sober mastery of the King’s English perform half-drunk soft-shoe routines. I’ve seen sportswriters wearing Tarzan costumes. I’ve seen federal judges and police chiefs dressed in drag singing satirical versions of Broadway show tunes. (In fact, if there’s a common denominator to every headliners show, it’s that there must be at least one drag number.) But here’s my point:

All the material is lampooning the previous year’s news, with often quite barbed send-ups of the people involved. And everybody is fair game. It’s a sophisticated version of April Fool’s Day. For this one event, on this one night, you can throw tomatoes—and expect to take a few in the face yourself.

Among the most self-righteous columns of the post-Wolf event was that of Margaret Sullivan, in the Post, who called for the eradication of the Correspondents Dinner entirely because it is “suicidal for the press’s credibility.”

No, what’s suicidal for the press’s credibility is constantly trying to pose as pristine white-robed guardians of the republic who have sworn eternal allegiance to The Truth, a concept held so dear that, like the holy of holies in the Temple, it can only be glimpsed by a journalistic initiate who keeps himself or herself celibate, abstaining from all foul sources of moral decay, like lobbyists or Pentagon contractors.

In fact the truth is a dirty messy changeable often counterintuitive morass of human activity that can only be approached, not described, and the once-yearly Dance of the Fools that occurs at the Correspondents Dinner is an acknowledgment by all the ink-stained wretches in the universe that we are merely producing, in the words of Post icon Ben Bradlee, “a rough draft of history.” Margaret Sullivan can run for Least Likely to Get Drunk in a Dive Bar while endorsing all the “solid reporting” that “speaks truth to power,” but I’ll throw in my lot with the guys who still need three stiff whiskeys at the end of the day because they’re worried about fourteen things they may have missed. (While we’re on this topic, why do all the stories in the Times and the Post have double and triple bylines? Hugh Aynesworth, to name just one great reporter I’ve worked with, covered all three events of the Kennedy assassination—Dealey Plaza, the arrest of Oswald, the murder of Oswald—with no help at all. Let’s not be wimpy, guys. Heed the motto of Texas Ranger Bill McDonald: “One riot, one Ranger.”)

So here are the reasons I blame the organizers of the Correspondents Dinner—the journalists themselves—for what evolved as a highly politicized attack on defenseless people.

Numero Uno: There’s nothing wrong with bringing in a professional comedian or an outsider journalist to host the event, but it has to be someone who knows what room they’re in. I’ve never seen a worse example of someone not playing to the room—and I’m speaking from the standpoint of a guy who has totally bombed by not understanding the room. The proper way to deal with Sarah Huckabee Sanders, since she was sitting ten feet away, would be to hit her with some soft jokes and then hug her, not nuke her with no chance of rebuttal. Michelle Wolf’s comments after the show indicate she was either totally unfamiliar with the traditions of the event or, more likely, just didn’t care.

Just two quotes from NPR to indicate how clueless this woman is:

“A friend of mine who helped me write, he gave me a note before I went on, which I kept with me, which was ‘Be true to yourself. Never apologize. Burn it to the ground.’”

Okay, so now we can safely say, “Screw Michelle Wolf.” Contempt for the people who hired her. Contempt for the institution itself. Embarked on some sort of personal “brand” that she couldn’t bother to alter for the mere audience.

This might be the fault of the event organizers, or it might be that she lied about following the rules, but either way, we know it could have been oh-so-different. Avowed socialist Lewis Black agreed to do the same event without profanity—a restriction he bridled at—with President Bush sitting right next to him the whole time. He not only succeeded in making everyone laugh, he succeeded in making the president laugh at himself. In other words, there are comedians who don’t feel they have to “burn it to the ground” in order to be successful. Even comedians who are in the business of burning it to the ground.