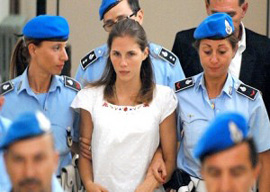 In youth I once drove across a vast expanse of central Mexico in my convertible. I paused in many villages to meander through modest churches, eat with locals, and play games with the barefoot children. Today anyone who would do the same is either a fool or suicidal.

This is not to impugn the Mexican people or their countryside. As in many places, most individuals are decent on all counts. Yet the global meme of dusky natives trammeled upon by pale colonials has been pervasive, even in the hinterlands.

Should one be in such places when a child disappears, a woman is raped, or a man murdered—and there is any way the crime can be pinned on the “white man”—it most certainly will be so. This is true not only in Third World nations but in any place that paler pelts or their philosophies are in abeyance.

Falsely accused prisoner Amanda Knox has been released in Italy, itself basically a Second World country. For those unfamiliar with the facts, this young American college student ventured abroad for an annum to work and study. In 2007, she unwisely chose to cohabitate a rental flat with three other female students. One of these other girls was Meredith Kercher, who was later sexually assaulted and murdered.

An African named Rudy Guede was arrested and eventually convicted by ample evidence at the scene. Yet authorities had already targeted Knox and her boyfriend, largely on the basis of extremely dubious circumstantial suspicion and by no means the determinative physical proof which linked Guede to the crime.

With this earlier arrest, the Italian media and judicial system went insane. The press assigned sexualized nicknames to Miss Knox. Elaborate and graphic theories were spun out of whole cloth involving orgiastic frenzies. The prosecutor at varying times made bizarre claims of Satanism and vampirism against the accused.

“Old suspicions and hatreds are always only one accusation away.”

It is true poor Miss Knox made many mistakes, including idiosyncratic reactions to the death and cracking under Italian psychological torments during her interrogation. Yet perhaps the greatest of her misapprehensions was a naïveté concerning both the state of Italian justice and the degree to which we are not “all the same.”

In Italy, as in most countries, police questioning begins physically. A criminal suspect should abandon all notion of having “rights.” In fact, Knox has accused Italian policewomen of hitting her during roundtable questioning lasting 50 hours. This is not uncommon in such places.

Mental pressure is also brought to bear in the form of lengthy interrogations and misleading questions. As to these, Knox states the Italians asked her “to imagine how the murder would have been committed,” to which she gave explicitly fictionalized responses later used against her and others as a supposed confession.

Knox further alleges the Italians falsely reported to her a blood test she was given had returned HIV-positive. They allowed her to live with this for days before informing her upon secondary examination it was a “false positive.” Meanwhile, authorities perversely demanded a detailed list of her past sexual experiences and maliciously released it to the press.

One can empathize deeply due to Miss Knox’s upbringing. Hailing from largely homogenous Seattle she apparently believed that there are no such things as racial differences, and even if there were, they could only manifest in a wholly positive way.