Why Kate Middleton is Prince William’s Only Option 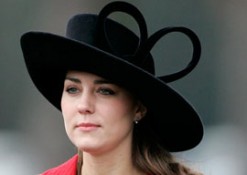 It goes without saying that Prince William is considered by many to be the most eligible bachelor in the world. He’s handsome; he”ll inherit the Crown Jewels; the Queen is his granny; Prime Ministers and Presidents will bow before him. Clearly, he’s a catch.

And yet, he’s stuck with Kate Middleton.

There are still some who relish the prospect of Catherine (as she has requested friends now call her) becoming a member of the Firm”but as time passes, the less goodwill she seems to enjoy and the more ambivalent the general public becomes. Hardly an ideal position for a future Queen.

You”d be forgiven for mistakenly considering the job of HRH to be the best in the world, but let’s be clear: it is a job. Those in Prince William’s circle know this. His mother Princess Diana didn”t. (Glamorous? That’s what Lady Di thought in 1981, too, after only a handful of dates with Prince Charles followed by a whirlwind engagement.)

Diana Spencer wasn”t the first woman Prince Charles proposed marriage, to, however. According to Tina Brown’s unputdownable The Diana Chronicles, that dubious first honor went to second cousin Amanda Knatchbull. She turned him down.

A precedent had already been set by previous girlfriend Lady Jane Wellesley, the Duke of Wellington’s daughter, who quipped to reporters while dating Charles, “I don”t want another title”I”ve already got one.”

Jane and Amanda understood what Diana didn”t. To be a senior royal is not a VIP pass to an endless succession of glittering parties (although there are, of course, glittering parties aplenty). To the contrary: it means daily duty, a regimented schedule, no room for spontaneity, hundreds of charity appearances a year, mind-numbing small talk, a perma-paste smile, crushing responsibilities, 24/7 surveillance, zero privacy”and dwindling respect and appreciation from a public who doesn”t understand your immense contributions and increasingly views you as a tax burden.

“Well-bred, moneyed English beautieshave learned from Princess Diana’s legacy, reportedly feeling like Jane Wellesley before them: give up an already-abundant life for stifling duty, no privacy and the chance to briefly wear a heavy crown in Westminster Abbey? No, thanks.”

During his infamous break from Kate in 2007, Prince William saw a succession of other women, but quickly found that those outside his social circle (the good-time gals he met at bars and clubs) would not only never fit in, but were often all too eager to sell their stories to tabloids (“Royal Picture Sensation: Come Back to My Palace!” trumpeted one). Those within his circle, meanwhile”well-bred, moneyed English beauties like Arabella Musgrave, Isabella Anstruther-Gough-Calthorpe and Olivia Hunt”have learned from Princess Diana’s legacy, reportedly feeling like Jane Wellesley before them: give up an already-abundant life for stifling duty, no privacy and the chance to briefly wear a heavy crown in Westminster Abbey? No, thanks. (Leave that to somebody who actually has something to gain”like an upper-middle class girl from Berkshire, perhaps.)

There are only a couple of European Princesses around Prince William’s age who would be attractive prospects to his discerning eye: women like Sweden’s gorgeous Princess Madeleine, brainy, Brown-educated Princess Theodora of Greece and Denmark, and the sublime Charlotte Casiraghi, daughter of Princess Caroline of Hanover and Grace Kelly’s granddaughter. Considering his lifelong tendency to insulate himself with fellow next-gen Sloanes and Hooray Henrys, however, it’s unlikely that somebody not born in the UK”somebody who didn”t understand the complex social rules of his set”would make the cut, title or no title. After all, the days of intermarriage between European royals to benefit foreign-policy are long-gone, so at this point it’s all about”gasp!”love and friendship, not dynasty-building. Even were William and Charlotte to bond over a shared love of horses, her Catholic faith takes her out of the running. (Oh, you pesky Act of Settlement 1701!)

The name that repeatedly pops up is that of Kenyan adventuress Jecca Craig, who reportedly enjoyed a “pretend engagement” with Wills in their youth, was the Guest of Honor at his 21st birthday party, has remained close with him through the Kate Years, and who unexpectedly called off her own wedding last year. She represents a rare chance for William to replace Kate with somebody long-known (and approved of by his friends) who is neither blinded by the Crown’s gleam, nor horrified by its restrictive weight. The fact that St. James Palace once denied their relationship, however”the only would-be girlfriend ever to benefit from such a statement”implies that theirs has only ever been a deep friendship. And just in case, clever Kate has made sure to befriend Jecca. Keep your friends close, after all…

So, Waity Katie”with so many secrets locked up behind that glossy mane”has steadfastly watched and learned, thwarting the notoriously stubborn English class system to brilliantly rise above her station. She’s proven to be the rarest of companions: somebody loyal who is also willing to play the same game that unhinged (or disinterested) so many before her. And unlike Diana, she’s been granted nearly a decade to fully understand what she will be marrying into.

There is nobody else. Catherine Middleton it will be.