Why Mumia is Guilty 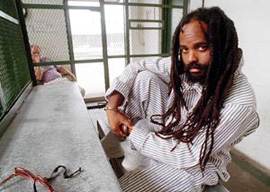 Convicted cop-killer Mumia Abu-Jamal—easily the world’s most famous death-row prisoner—has finally been demoted from death row. Philadelphia District Attorney R. Seth Williams announced last Wednesday that his office would no longer challenge a 2001 federal court decision overturning Abu-Jamal’s 1982 death sentence. Barring a retrial, the murder conviction will stand and Abu-Jamal will spend the rest of his life in prison without the possibility of parole.

Last Friday marked thirty years since the early morning murder of Philadelphia police officer Danny Faulkner, shot in the face as he lay on a downtown sidewalk after being shot in the back from close range. But Faulkner remains unknown while Abu-Jamal has achieved international celebrity and an iconic near-sainthood status among progressives, what with their limitlessly bad judgment in selecting black heroes.

“But Faulkner remains unknown while Abu-Jamal has achieved international celebrity and an iconic near-sainthood status among progressives, what with their limitlessly bad judgment in selecting black heroes.”

Since his murder conviction, Mumia has become a countercultural rock star, a marketing franchise, and an unlikely (if predictable) political hero. He’s been praised by Chomsky, Derrida, Tutu, Mandela, Wiesel, and nearly every person on Earth who ever thought Trotsky was a really cool dude. Via recordings, he has served as commencement speaker for two different American colleges. He has been made an honorary citizen of an estimated two dozen cities worldwide. The French love him to pieces. A street in suburban Paris is named after him. When Paris made him an honorary citizen, it was the first time they’d bequeathed anyone that distinction since doing it to Picasso in 1971. Danielle Mitterand, former first lady of France, even trekked all the way out to rural Pennsylvania to console Mumia on death row.

The entertainment industry blithely stampedes over Danny Faulkner’s carcass in their rush to embrace Mumia. Oliver Stone, Sting, Ed Asner, Alec Baldwin, Mike Farrell, Susan Sarandon, Martin Sheen, and countless others insist their puppy-eyed dreadlocked hero is merely a “prisoner of conscience,” a crusading activist reporter targeted by fascist stormtroopers for bravely opening his hairy yap one too many times about their evildoing.

The narrative they’ve carefully molded and maintained over the years is that Mumia was framed by racist pigs merely for writing about racist pigs and that he really didn’t exchange gunfire with that racist pig who shot him, even though that racist pig still wound up dead. To them, the pig’s grieving widow is merely an attention-seeking racist bitch. They’re focused solely on Mumia and his suffering.

And although they probably wouldn’t care if Mumia actually did it—after all, don’t all racist capitalist imperialist pigs deserve to be shot in the face?—they insist he didn’t.

So what’s the truth? Or at least, what’s the most plausible theory about what happened on that cold December morning on a street near City Hall known to swarm with hookers and cops? (If you feel bold enough to dive into the JFK-assassination level of conflicting details and theories, here’s an exhaustive overview from the Free Mumia crowd and one from the Fry Mumia bunch.)

At Mumia’s trial, the prosecution presented its theory as to what happened, as did the defense. Mumia’s brother William Cook kept schtum for twenty years until he finally coughed up an alternate theory regarding another shooter. I’ll review the problems with all those theories and then present my own theory—which, as an ex-Philly cabdriver, makes perfect sense to me.