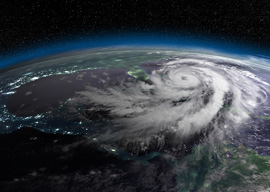 Twenty years or so ago I was doubtful about climate change and global warming. This was partly because I remembered that back in the 1970s we were being threatened with a new ice age. I recall an apocalyptic article in The Times, written, I think, by the editor, William Rees-Mogg himself, which told us how everything was going to freeze up with the direst of consequences. Well, I thought, the scientists seem to have got that wrong; why should they be right this time?

Even if they were, and the world indeed was warming dangerously, I wasn’t persuaded that the responsibility lay with us. Indeed the idea that the actions of human beings could bring about catastrophic climate change seemed an example of our arrogance. After all, in geological terms, we are fairly recent arrivals in the world, and before we came on the scene there had been extraordinary climatic changes. The island of Britain was once attached to the continent of Europe until climate change separated the two. There had been ice ages and warm periods long before our earliest ancestors took their first uncertain steps.

“It now seems safer and wiser to bet on the reality of damaging climate change than to bet against it.”

Moreover, even in our own brief history, there had also been climatic shifts. The medieval warm period in the northern hemisphere, a time when wine could be made by monks in Yorkshire, had been followed by what is known as “the Little Ice Age” when fairs could be held on the frozen Thames in London. Indeed in one’s own far shorter lifetime one had, in the generally benign climate of the British Isles, experienced a succession of very cold winters in which snow lay deep on the ground for weeks and even months, followed by a number of years when winters were mild, wet, and windy. Such variation seemed to be a law of nature; therefore nothing to be alarmed by.

“Ah,” said the scientists, “weather is one thing, climate another; you must look at the long term.” Fair enough, of course, but while one could look back with some certainty because there was measurable evidence, looking ahead by means of computer predictions could only be speculative.

So I was quite comfortable in my skepticism. However, as the years passed, the weight of scientific opinion and the credence given to this by governments began to tell. “Much water weareth away stone,” and, even if some of the evidence seemed to be contradictory, measurable changes in the Arctic and Antarctic, and in rising sea levels, seemed to indicate that dramatic changes were indeed taking place. Moreover the willingness of governments to take what was hailed a remedial action made it harder to stay skeptical. Air pollution was an evident, and undeniable, problem, recognized even by China and India, both late-developing countries. There was evidence that weather was becoming violently changeable, with storms of remarkable ferocity. Something was happening. The climate might not be changing, but it did begin to seem likely that it was.

Now governments almost everywhere have been persuaded that we must reduce our reliance on fossil fuels, indeed move from coal, gas, and oil to wind power and solar power, and in some countries, the U.K. among them, a date has been set, admittedly still some twenty years ahead, for the replacement of petrol- and diesel-powered cars by electrically powered nonpolluting ones. This is a remarkable development, and evidently it can’t be long before nonelectric cars, buses, and lorries are banned from cities.