Why Weiner’s Going Under the Bus 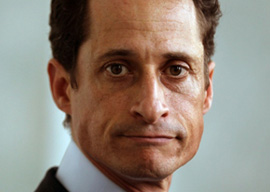 Is there any redeeming social value to the tawdry tale of Anthony Weiner?

Only this: The nationwide revulsion at the conduct of the congressman has compelled the leadership and members of the House Democratic caucus to demand he resign immediately and cease not only distracting them from their work but stinking up their party.

Traditional morality has just been affirmed by Nancy Pelosi and the House Democrats.

For consider what it was Weiner did.

He sent lewd and pornographic photos of himself to half a dozen women, including a college student, a stripper and a 17-year-old who had befriended him on Facebook. He initiated “sex-ting” with women who had simply expressed admiration for his politics and leadership.

On seeing a few of the photos in the tabloid press and reading of the others and Weiner’s language, the adjectives that come to mind are gross, infantile, weird, sick, suicidal.

How could a congressman sit in his office at night text-messaging these kinds of pictures, engaging in that kind of talk, when he was surely aware he was being monitored by enemies who would relish ending his career in the kind of disgrace he faces today?

“The culture war is not yet wholly lost.”

But how does Weiner’s disgrace and inevitable departure from politics affirm the old morality?

Again, consider. Weiner has not been accused of a crime. His exchanges with the 17-year-old are of a flirtatious and suggestive nature rather than a proposition. And while Pelosi has asked the ethics committee to look into his conduct, its investigation has yet to begin.

Of what exactly, then, is Weiner guilty? He went before the press and lied, defiantly denying he had sent the text messages to the student. Four days later, he admitted to sending the messages.

But did not President Clinton lie, under oath, about a far graver offense, his Oval Office trysts with Monica Lewinsky? Yet, to a man, Senate Democrats refused to remove him. Why, then, must Weiner be removed?

Two decades ago, Rep. Gerry Studds admitted to seducing a 16-year-old male page and taking him on a European junket. Yet when censured by the House, Studds turned his back to the speaker’s chair—and was re-elected repeatedly from his Massachusetts district.

What Weiner did was degraded, but it did not rise to the level of what Studds survived.