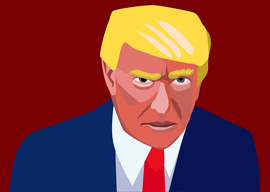 Late Thursday afternoon I was checking into a motel in Gallup, NM, also known as “Drunk Town, USA.” Stranded in far western New Mexico and surrounded by dissolute Injun reservations, this gloriously seedy tiny town serves as the major supply center for a proud but beaten-down group it used to be politically acceptable to refer to as Indians.

As evidence of creeping globalism even way out here in the dusty desert, an American Indian was standing in front of me renting a room from the proprietor, who was also an Indian, but of the “dot” rather than the “feather” variety.

As the proprietor was pecking away at his keyboard, the American Indian”grizzled and worn-down and sad-looking, as they all tend to be”turned to me and asked, “Did you hear what Trump did?”

“After all your campaign promises, why did you suddenly go global?”

Now that I know more details, all I can say is: Why?

I”ll strain to keep a lid on the hyperbole, and I”ll spare everyone the sobbing, but I can suddenly relate to the female SJW who famously howled NOOOOOOOO the moment Trump was inaugurated. This felt like a groin kick and gut punch at the same time.

Why”d you do it, Don? After all your campaign promises, why did you suddenly go global?

People were quick to resurrect a series of Trump’s tweets from 2013 that heckled Barack Obama for even daring to consider intervening in Syria:

The President must get Congressional approval before attacking Syria-big mistake if he does not!

AGAIN, TO OUR VERY FOOLISH LEADER, DO NOT ATTACK SYRIA – IF YOU DO MANY VERY BAD THINGS WILL HAPPEN & FROM THAT FIGHT THE U.S. GETS NOTHING!

We should stay the hell out of Syria, the “rebels” are just as bad as the current regime. WHAT WILL WE GET FOR OUR LIVES AND $ BILLIONS?ZERO

What will we get for bombing Syria besides more debt and a possible long term conflict? Obama needs Congressional approval.

We should stop talking, stay out of Syria and other countries that hate us, rebuild our own country and make it strong and great again-USA!

President Obama, do not attack Syria. There is no upside and tremendous downside. Save your “powder” for another (and more important) day!

Let the Arab League take care of Syria. Why are these rich Arab countries not paying us for the tremendous cost of such an attack?

Only days before last November’s election, Trump told a crowd in Florida that Hillary Clinton “wants to start a shooting war in Syria…that could very well lead to World War III.”

Shortly after hearing about the missile launch, it occurred to me that if Trump was attacking the Putin-backed Assad, at least that should squelch all the nonsensical rumors that Trump is Putin’s puppet. Both Putin and Assad deny responsibility for the chemical attack of April 4, and I”ve heard multiple murmurings that this was a “false flag” operation designed to bait Trump into war. One thing I find a mite odd is that Trump reportedly warned the Russians prior to the attack. If this is all some elaborate joint effort between the Trump Administration and the Russians to cast doubt over these endless accusations that they engage in elaborate joint efforts, it’s an absolutely brilliant move and Trump truly is the fourth-dimensional chess wizard his fondest acolytes claim he is.