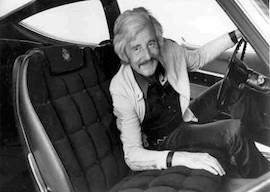 How much money is enough? Would $30 million suffice for an old woman with no children?

I ponder these questions as I try to understand why Marianne Nestor Cassini has spent several months in Nassau County Jail for contempt of court.

The widow of Oleg Cassini was left half of his $60 million estate, with his four grandchildren set to inherit the other half. But $30 million is evidently not enough for Marianne.

Since Oleg’s death in 2006, she has refused to give the grandkids a dime and failed to comply with various court orders. An exasperated judge on Long Island, near Cassini’s Gatsby-like estate in Oyster Bay, finally had her jailed last year.

One of the humiliations Marianne has suffered since then—besides strip searches and bad prison food—is the revelation that she’d been lying about her age. She isn’t 68. She’s 76.

I knew Oleg since he was Jackie O’s favorite designer and dressing my mother and her friends. The mustachioed descendant of Russian nobility was a top tennis player and equestrian who was racing trotters well into his 70s.

An infamous swordsman, Oleg bedded Grace Kelly, Ursula Andress, and Marilyn Monroe and married Gene Tierney, who had two daughters before they broke up for good.

“Most people, if offered an inheritance of $30 million, would gratefully take it and enjoy the rest of their days.”

Marianne, a fashion model who had appeared on 200 magazine covers, had worked for Oleg for decades. But no one knew until his death that they’d secretly been married since 1971.

The theory is that Oleg’s brand—still successfully selling perfume and wedding gowns—was helped by his image as a dashing, very available playboy. Marianne stayed in the background as his gal Friday, helped by her sister Peggy, who also worked for Oleg.

I’ve known Marianne since we stood together at a swimsuit show while the Pointer Sisters sang “Jump.”

Most people, if offered an inheritance of $30 million, would gratefully take it and enjoy the rest of their days. But Marianne wants it all, the Oyster Bay estate, the Gramercy Park town house where Oleg lived, and the East 63rd Street building that houses Oleg Cassini Inc.

Oleg’s daughter Daria died childless in 2010. Christina, who went to the Masters School in Dobbs Ferry, died in 2015 survived by four children.

But Marianne believes the grandkids should have no claim to Oleg’s legacy because Christina wasn’t really Oleg’s daughter—she was the product of an extramarital affair between Tierney and handsome Hollywood agent-producer Charles Feldman.

The 1948 fling was chronicled by Louella Parsons and other columnists, as was a brief marital reconciliation soon after news broke that Tierney was pregnant. It looks like Oleg did the right thing for his estranged wife to avoid scandal.

Marianne claims Christina’s resemblance to Feldman is uncanny, but no DNA testing has been done. And the issue is moot.

Robert De Niro once—after paying child support to an ex for many years—was able to get a DNA test to prove he wasn’t the father, but the judge ruled that he had to keep paying because it wouldn’t be fair to the child to suddenly stop the gravy train.

Since Oleg treated Christina as his daughter, she was legally his daughter, no matter what Marianne says. But her lawyers have had trouble getting her to listen. One called her “stubborn.”

So she stubbornly stays in jail like a dog in the manger, while the court system seizes Oleg’s various assets and auctions them off. Christina died before she could inherit, but maybe her children will finally collect.