Will America Tolerate a Redheaded Quarterback? 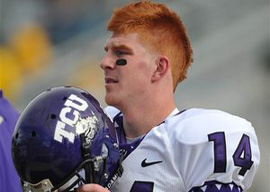 With the NFL draft approaching this Thursday, an unidentified pro football executive recently asked a reporter whether Rose Bowl-winning quarterback Andy Dalton’s cheese doodle-colored hair might impede his ability to succeed in the big leagues:

Has there ever been a redheaded quarterback in the NFL who’s really done well? It sounds idiotic, but is there any way that could be a factor? We’ve wondered.

The executive said he felt Dalton’s red hair was a “red flag.” Press coverage noted how Dalton’s flaming-orange follicles made him easy to spot on campus at Texas Christian University and how he had donated his spare time to help counsel a pair of younger carrot-topped boys who”d been persecuted at school because of their hair color.

A couple generations ago, pink-skinned freckle-faced red-haired male icons such as Howdy Doody, Archie Andrews, and Richie Cunningham seemed to epitomize Middle America. These days they”re treated as if they were Martians.

“I”d like to see the ginger equivalent of the Stonewall Uprising or even the Watts Riots.”

I went to school with Cunninghams and Callahans and Mulvilles and Carneys who had tangerine-colored manes and so many freckles, they may as well have been Kaposi’s Sarcoma spots on an AIDS patient. I”d reckon that one in five of my grade-school classmates was what is now known in the US”due in huge part to a single 2005 South Park episode”as a “Ginger Kid.” And though in school we all mercilessly teased and tortured one another for innumerably ridiculous reasons, I can”t ever remember anyone being mocked for having red hair. But the past few years have seen a spike not only in anti-ginger rhetoric, but also in physical persecution. Kids from Calabasas up to Alberta have even organized on Facebook to celebrate rituals such as “Kick a Ginger Day.”

Apparently ginger-bashing”just like the recessive gene that causes red hair”can skip a generation or two, because it’s a tradition with deep historical roots. Various sources claim that ancient Egyptians ritually burned red-headed males alive to appease the god Osiris. Ancient Greeks were said to have deemed redheads as mentally unbalanced individuals who became vampires when they died. Germanic cultures from the 15th through the 18th centuries allegedly considered freckles to be the “mark of the Devil,” murdering an estimated fifty thousand redheads on suspicion of witchcraft. During the Spanish Inquisition, red hair signified the indelible mark of both Satan and of Jewishness”take your pick.

But even Jews these days have a homeland, whereas there is no majority-redhead nation anywhere on Earth. The ginger breed is most abundant in Scotland, but still it only comprises a mere thirteen percent of the population. Next up is Ireland at ten percent. Australia’s demographics are also said to be reasonably freckled with red. And nowhere on Earth are redheads so openly mocked and abused these days than in Australia and the British Isles, possibly due to centuries-old Anglo/Celtic tensions.

In England the predominant slur is “ginger””often pronounced with a hard “g””with common variants such as ginger nut, ginger pubes, ginger bollocks, lanky string of ginger piss, ginger minger, and ginger whinger. UK redheads are also referred to as carrots, Duracells, period heads, tampon tops, and copperknobs. Although the favored Aussie slur for redheads used to be “bluey,” they”ve lately turned to “bloodnuts” and especially “rangas“ (a twist on “orangutans”).

British and Australian media are not shy about disparaging gingers in ways that would be considered hate speech in nearly any other context. An advertisement for a British power company in 2000 depicted red hair as an unfortunate genetic curse. A 2009 Christmas card that sold briefly at the British retail chain Tesco said that “SANTA loves all kids. Even GINGER ones.” A 2009 Virgin Media print ad implied that gingers were undesirable sex partners. Down in Oz, Adelaide Zoo once ran an ad that offered “free zoo entry for all rangas,” and an Australian TV public service announcement equates being a “ginga” with being a “dickhead.”