Will Ferrell’s The Other Guys: Surprisingly Funny 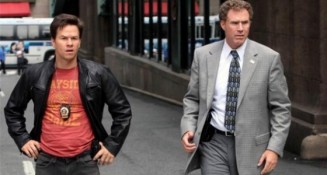 Despite both a forgettable title and the fifteen years in which Will Ferrell and writer-director Adam McKay have been beating their brand of comedy into the ground since they first teamed up at Saturday Night Live, The Other Guys is an implausibly funny movie.

McKay’s approach hasn”t much changed since he revitalized Chicago’s Second City improv troupe with his revue PiÃ±ata Full of Bees in the mid-1990s. As he’s done in his previous collaborations with Ferrell”Anchorman, Talladega Nights, and Step Brothers“McKay provides a framing narrative while letting his stars stretch the show in silly directions. There’s nothing terribly new here: as Woody Allen likes to point out, his hero Bob Hope’s 1940s movies were fully postmodern in their surrealistic self-awareness.

Humor is about surprising, but successful comedy movies, such as Anchorman, become influential so quickly that their style soon stops amusing. Thus, comedy careers, such as Jerry Lewis’s or Jim Carrey’s, tend to have a high burn rate. Objectively, Eddie Murphy was as funny as ever this summer as the voice of Donkey in Shrek Forever After, but there’s nothing objective about being funny: Murphy’s time will always be the early 1980s.

That Ferrell and McKay have, after all these years, still come up with enough startling shticks, enough new riffs on masculine rivalry and revelry to keep audiences from getting completely sick of The Other Guys is surprising.

This buddy cop spoof begins with the triumphant exploits of the NYPD’s coolest cops. In cameos played by Samuel L. Jackson, as the same character he’s done since Pulp Fiction, and Dwayne Johnson, the genial half-Samoan, half-black ex-pro wrestler formerly known as The Rock, the two supercops wreak $12 million in property damage to Manhattan while arresting a smalltime weed dealer. Then Jackson and Johnson take a victory lap around the police station, tossing their unfilled-out paperwork to “The Other Guys,” the precinct’s most pathetic desk jockeys, played by Ferrell and Mark Wahlberg, who become the movie’s main characters.

“Ferrell has ingeniously portrayed numerous morons, so it’s about time he played somebody smart. This might be his freshest character since 2003’s Christmas classic Elf.

The Other Guys could have been more memorably entitled The White Guys. Much of comedy these days, especially funny TV commercials about doofus dads, gingerly deals with the paradox of a culture in which white guys have seemingly been dethroned from the top of the masculinity pyramid. Yet, the people who have the really good jobs making the movies, TV shows, and ads poking fun at white guys remain, overwhelmingly, white guys like McKay and Ferrell.

Wahlberg revisits his one apt role of the last decade”the vicious but truehearted policeman in The Departed“just with his IQ lowered 30 points. A juvenile delinquent from the white slums of Boston, Wahlberg has enjoyed a curious career in which he has starred in remakes of roles originated by Cary Grant, John Wayne, and Charlton Heston. Hollywood seems to envision the former rapper and underwear model as a man exuding technical competence. Hence, he played an astronaut in Planet of the Apes, a master jewel thief in The Italian Job, and a super sniper in The Shooter.

In The Other Guys, however, Wahlberg portrays an angry idiot, and does a fine job. His cop has been stranded on desk duty since his trigger-happiness at Yankee Stadium cost New York the World Series. He is particularly incensed by his deskmate (Ferrell), a Prius-driving “forensic accountant” who doesn”t share any of his Lethal Weapon-style rogue cop ambitions. (It’s doesn”t help the bantam cop’s composure that Ferrell’s nerd is eight inches taller.)

Ferrell has ingeniously portrayed numerous morons, so it’s about time he played somebody smart. The rise of the self-conscious, self-confident nerd might turn out to be the most important cultural development of the last 35 years, and Ferrell nails the general type, while adding some uniquely insufferable twists.

This might be Ferrell’s freshest character since 2003’s Christmas classic Elf. Ferrell remains the anti-Bill Murray, a high-energy star not afraid to fail, which he does frequently. But not always, as exemplified by Ferrell’s jaw-droppingly literal response to Wahlberg’s claim about who would win in a fight between a lion and a tuna.

On the downside, too many red herrings clutter the plot, which has something to do with Ferrell and Wahlberg busting a Bernie Madoff-like financier trying to steal $32 billion. Yet, casting in the Madoff role Steve Coogan, a suave Englishman of Irish descent, seems to intentionally miss the joke.

Ironically, McKay sees himself as a strident leftist speaking truth to the power of the corporate overlords, as his closing credits”which lecture us about the AIG bailout over a Rage Against the Machine song”attempt to prove. Yet, despite the nonstop hype about “edginess” since SNL‘s debut 35-years-ago, post-1975 American comedy has been anti-political. McKay’s SNL-honed style of character-based silliness striving to concoct popular catchphrases is, effectively, the opposite of political satire.