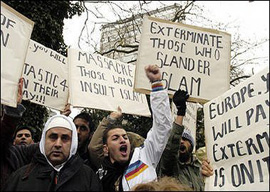 Is multiculturalism a failure in France? “My answer is clearly yes, it is a failure,” says President Nicolas Sarkozy.

Only in Canada and the U.S., it seems, is the issue still in dispute.

Yet these European leaders are not leading anyone. They are far behind the people, and their belated appreciation of the idea of national identity is but a product of political panic. Take Merkel in Germany.

Last summer, Thilo Sarrazin published a book the title of which may be translated as “Germany Abolishes Itself.”

Sarrazin argued that Germany’s gastarbeiters, guest workers—Turks, Kurds, Arabs—are dumbing down the nation. While Germany’s birth rate fell below replacement levels decades ago, these foreigners with less intelligence and much higher dropout, welfare and crime rates are rapidly replacing the declining German population.

“It is a matter of culture,” said Sarrazin, and “Islam is the culture.” This is why Muslim immigrants are “socially, culturally and intellectually inferior to most everyone else.” Yet Sarrazin did use the phrase a “genetic minus” to describe migrants from the Middle East.

Were these the ravings of a neo-fascist intellectual and closet admirer of the late Fuhrer? Not at all. Sarrazin was a proud member of the Social Democratic Party of Willy Brandt and a board member of the Bundesbank.

With Merkel and the German establishment howling for his head, Thilo resigned, unrepentant. Two-thirds of Germans said he had a right to speak his mind, a third said they agreed with him, and “Germany Abolishes Itself” has sold over a million copies.

“What these parties share is that all are anti-immigrant, anti-Muslim and ethnonational.”

It was in response to the firestorm of the Sarrazin affair that Merkel discovered that multiculturalism was a failure. Her EU colleagues have since been falling all over one another to agree.

Another factor has contributed to the sudden awakening of the EU’s elite—an explosion of anti-immigrant parties that are siphoning off working-class voters from socialist parties and nationalist voters from conservative parties.

Among these are Jean-Marie Le Pen’s National Front in France, the British National Party, the Vlaams Belang in Belgium, Geert Wilders’ Freedom Party in Holland, the Swiss People’s Party of Christoph Blocher, which won the battle to ban the burka, the Austrian Freedom Party and Alliance for Austria’s Future, the Jobbik Party of Hungary, the Lega Nord in Italy, which favors secession, the Danish People’s Party, and the Sweden Democrats, who just won a toehold in parliament.

What these parties share is that all are anti-immigrant, anti-Muslim and ethnonational. They want to retain, or restore, a nation of, by and for their own kind, with its own history, holidays, heroes, language, literature, music and art. They are fiercely resistant to any dilution of the ethnic composition or cultural character of their countries.

What is the menace of multiculturalism these people see?