Will There Always Be an England? 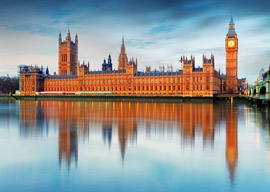 In his op-ed in The Washington Post, Chris Grayling, leader of the House of Commons, made the case for British withdrawal from the European Union—in terms Americans can understand.

Would you accept, Grayling asks, an American Union of North and South America, its parliament sitting in Panama, with power to impose laws on the United States, and a high court whose decisions overruled those of the U.S. Supreme Court?

Would you accept an American Union that granted all the peoples of Central and South America and Mexico the right to move to, work in, and live in any U.S. state or city, and receive all the taxpayer-provided benefits that U.S. citizens receive?

This is what we are subjected to under the EU, said Grayling.

And as you Americans would never cede your sovereignty or independence to such an overlord regime, why should we?

Downing Street’s reply: Prime Minister David Cameron says leaving the EU could cost Britain a lot of money and a loss of influence in Brussels.

The heart versus the wallet. Freedom versus security.

While Barack Obama, Cameron and Angela Merkel are pulling for Britain to vote to remain in the EU, across Europe, transnationalism is in retreat, and tribalism is rising.

“Britain ought not to go gentle into that good night the EU has prepared for her.”

As Britain’s Independence Party and half the Tory Party seek to secede from the EU, the Scottish National Party is preparing a new referendum to bring about Scotland’s secession.

The strongest party in France is the National Front of Marine Le Pen. In Austria’s presidential election, Norbert Hofer of Jorg Haider’s Freedom Party came within an eyelash of becoming the first European nationalist head of state since World War II.

The Euroskeptic Law and Justice Party is in power in Warsaw, as is the Fidesz Party of Viktor Orban in Budapest, and the Swiss People’s Party in Bern. The right-wing Sweden Democrats and Danish People’s Party are growing stronger.

In 2015, Merkel, Time’s Person of the Year, admitted a million Middle East refugees. This year, Merkel flipped and paid a huge bribe to Turkey’s Recep Tayyip Erdogan to keep Syrian refugees from crossing the Aegean to the Greek islands and thence into Europe.

In Germany, too, nationalism is resurgent as opposition grows to any new bailouts of the La Dolce Vita nations of Club Med. The populist AfD party has made major strides in German state elections.

While the rightist parties in power and reaching for power are anti-EU, anti-Islamic and anti-immigrant, the secessionist movements roiling Scotland, Spain, Belgium and Italy seek rather the breakup of the old nations of Europe along ethnonational lines.

By enlisting in these parties of the right, what are the peoples of Europe recoiling from and rebelling against? Answer: The beau ideal of progressives—societies and nations that are multiracial, multiethnic, multicultural and multilingual.

Across Europe, the tribalists are rejecting, in a word, diversity.

And what are they seeking?

God-and-country, blood-and-soil people, they want to live with their own kinfolk, their own kind. They do not believe in economics uber alles. And if democracy will not deliver the kind of country and society they wish to live in, then democracy must be trumped by direct action, by secession.

This is the spirit behind Brexit.

The is the spirit that drove the Irish patriots of 1919, who rose against British rule, though they were departing the greatest empire on earth in its moment of supreme glory after the Great War, to begin life among the smallest and poorest countries in all of Europe.

What is happening in Europe today was predictable and predicted.