Will Trump be Good for the Jewish People? 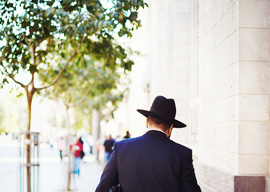 Much of the hysteria sweeping the fraction of the country that voted for Hillary Clinton originates in understandable Jewish worries about whether the rising tide of populist nationalism will be good for Jewish people.

While unfair, it’s reasonable for Jews to feel uneasy about Donald Trump’s promises to bring change to a global system under which, whatever its failings, Jews have prospered more than any other ethnic group.

Burkean prudence advises the people on top to be cautious about proposed changes. After all, they have the most to lose. On a per capita basis, Jews are, by far, the highest-achieving, richest, and most influential ethnicity in the world. So they naturally have concerns about the new breed of politicians promising a better deal for the masses. The status quo has been very good to Jews, so as the winners it’s only natural for them to be suspicious of reform.

American Jews, however, have increasingly lost a realistic sense of their own situation, as their talent for Narrative-molding works even better on themselves than it does on everybody else. Jews like to picture themselves as underdogs and thus the natural leaders in a democracy. Contemporary Jews are remarkably lacking in self-awareness of their overdog status.

This is relevant because we are constantly besieged by statistics purporting to demonstrate the existence of “white privilege.” The reigning conventional wisdom insists that any quantitative differences between whites and blacks must be assumed to stem from discrimination. Yet the even more disparate statistics showing Jewish statistical superiority over gentile whites are virtually never used to allege “Jewish privilege.”

“Thinking is work, and most gentiles are happy to not think about social realities that you don”t want them to think about.”

Indeed, many of the promoters of the white-privilege libel are Jews who would go berserk with rage if they were ever accused, using the same logic, of being beneficiaries of Jewish privilege. Therefore, the mainstream media almost never mention disproportionate Jewish representation.

Yet, it’s not hard to learn about the remarkable performance of Jews. Many Jews indulge, not unreasonably, in an ethnocentric fascination with Jewish accomplishments, so the internet features a plethora of Jewish periodicals and well-documented websites run by Jews tabulating striking data about Jews.

The numbers truly are fascinating.

First, consider Jewish achievement as measured by fairly objective Scandinavian scientists. Jews make up only about 0.2 percent of the world population but have earned just under one-quarter of the hard-science Nobel Prizes. According to lists kept by Bibi Netanyahu’s former science adviser, 49 Jews have won Nobels in physics, 34 in chemistry, and 53 in medicine.

In the more political categories, Jews have won fewer prizes in Peace (10) and Literature (13 including Bob Dylan), but have done very well in the quasi-Nobel of Economics, making up 25 of the 78 laureates since its founding in 1969.

Second, Jewish wealth. My best guess is that Jews make up somewhere around one-seventh of the world’s and about one-third of America’s billionaires. That’s amazing and important. This huge fact about the modern world comes up all the time in Jewish publications. But in periodicals not aimed at Jews, even in economics blogs, it can be like pulling teeth to get anybody to admit that there is anything at all interesting about 130 or more of the Forbes 400 belonging to one tiny ethnic group.

Third, Jewish influence. In 2009, The Atlantic published its subjective ranking of the 50 “most influential commentators“ in America. Just under 50 percent were Jewish by background. Jewish social scientists Seymour Martin Lipset and Earl Raab found similar inequalities in a host of other influential fields for the 1965″95 era.

The numbers are so overwhelmingly obvious that Jewish intellectuals used to worry about how liberal conventional wisdom could be turned against Jews. Back in the 1970s, the first generation of Jewish neoconservatives, such as sociologist Nathan Glazer in his 1975 anti-racial-preferences book Affirmative Discrimination, lamented that the white-privilege logic that imposed racial quotas upon whites in general could easily be used to inflict even more onerous burdens on the most successful group of whites, Jews.

After all, if statistics showing that whites saved more money, did better in school, and committed fewer crimes than blacks were considered prima facie evidence of white racism, what would the same rationale imply about statistics revealing that American Jews enjoy advantages over other whites roughly as large as whites enjoy over blacks? Surely, the pseudo-logic of “white privilege” would ultimately be bad for the Jews?

But this proved to be an example of smart Jews overthinking a potential problem by assuming that he who says A (“white privilege”) must say B (“Jewish privilege”).

In reality, if Jews sufficiently reward blacks for saying A and punish gentiles for saying B, there isn”t much danger of logical consistency after all. For example, in 1990, the media suddenly stopped praising film director Spike Lee for excoriating whites and turned on him for poking fun at greedy Jewish nightclub owners who financially exploit unworldly black jazz musicians, such as Spike’s dad. The artist’s career never quite recovered, and the message was delivered: Europhobia can be a good career move, but criticizing Jews will bring instant retribution down on your head.

Not surprisingly, in the 1990s, Glazer changed his mind and started supporting affirmative action.