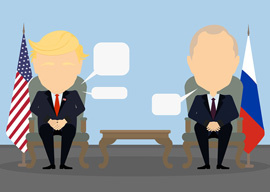 When word leaked that Exxon CEO Rex Tillerson, a holder of the Order of Friendship award in Putin’s Russia, was Donald Trump’s choice for secretary of state, John McCain had this thoughtful response:

“Vladimir Putin is a thug, a bully, and a murderer and anybody else who describes him as anything else is lying.”

Yet, Putin is something else, the leader of the largest nation on earth, a great power with enough nuclear weapons to wipe the United States off the face of the earth. And we have to deal with him.

McCain was echoed by the senior Democrat on foreign relations, Bob Menendez, who said naming Tillerson secretary of state would be “alarming and absurd … guaranteeing Russia has a willing accomplice in the (Trump) Cabinet guiding our nation’s foreign policy.”

Sen Marco Rubio chimed in: “Being a ‘friend of Vladimir’ is not an attribute I am hoping for from a Secretary of State.”

If just three GOP senators vote no on Tillerson, and Democrats vote as a bloc against him, his nomination would go down. President Trump would sustain a major and humiliating defeat.

“Behind the effort to smear Tillerson and delegitimize Trump lies a larger motive.”

Who is Tillerson? A corporate titan, he has traveled the world, represented Exxon in 60 countries, is on a first-name basis with countless leaders, and is endorsed by Condi Rice and Robert Gates.

Dr. Samuel Johnson’s observation—“A man is seldom more innocently occupied than when he is engaged in making money”—may be a bit of a stretch when it comes to OPEC and the global oil market.

Yet there is truth to it. Most businessmen are interested in doing deals, making money, and, if the terms are not met, walking away, not starting a war.

And here is the heart of the objection to Tillerson. He wants to end sanctions and partner with Putin’s Russia, as does Trump. But among many in the mainstream media, think tanks, websites, and on the Hill, this is craven appeasement. For such as these, the Cold War is never over.

The attacks on Tillerson coincide with new attacks on Russia, based on CIA sources, alleging that not only did Moscow hack into the Democratic Party and Clinton campaign, and leak what it found to hurt Hillary Clinton, but Russia was trying to help elect Trump, and succeeded.

Why would Moscow do this?

Monday’s editorial in The New York Times explains: “In Mr. Trump, the Russians had reason to see a malleable political novice, one who had surrounded himself with Kremlin lackeys.”

Backed by Democratic leader Sen. Chuck Schumer, McCain has announced an investigation. The goal, said the Times, is to determine “whether anyone within Trump’s inner circle coordinated with the Kremlin and whether Moscow spread fake news to hurt Mrs. Clinton.”

What is going on here? More than meets the eye.