Winter’s Bone: Blood in the Ozarks 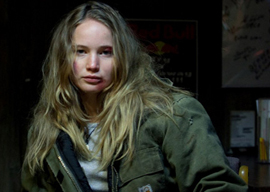 Winter’s Bone, an arthouse detective drama now out on DVD, is the Scots-Irish hillbilly equivalent of all those fine recent movies about the Irish Catholic Massachusetts underclass such as The Fighter and The Town (which Winter’s Bone edged out for a Best Picture Oscar nomination). It’s splendidly written and acted, although poorly lit.

Just as Charlestown is depicted in The Town as a multigenerational nest of bank-robbers, the Ozarks are envisioned in Winter’s Bone as a region culturally devoted to low-rent racketeering, whether moonshining in the past or cooking crystal meth today.

A huge fraction of movies are set among the putatively lawless, because a Hobbesian life is full of interest (as Winston Churchill observed of the Taliban’s ancestors, whom he fought near the Khyber Pass). In reality, Charlestown is by now almost wholly yuppified. And even the Ozarks are home to the world’s largest corporation.

Two decades ago, I would frequently set out from my corner office across Wacker Blvd. from Chicago’s Sears Tower for remote Bentonville, Arkansas, where I would be severely out-negotiated by Walmart’s Ozark Avengers. Sam Walton had made himself the richest man on Earth in part by demanding that us city-slicker salesmen leave behind corporate America’s expense-account bonhomie of skyboxes and wine lists to come wrestle over bottom-line terms with his hungry staffers in his headquarters” windowless interrogation cells.

Afterward, the cream of America’s corporate sales forces would stagger over to Bentonville’s best restaurant, a Ponderosa, for $3.95 chicken-fried steaks. (Suppliers weren”t allowed to take Walmart employees to lunch, so there was nowhere to spend more.) There, men in expensive suits would confront Mr. Walton’s final joke: His home turf was dry, so we couldn”t buy a drink.

Thus, I garnered a different impression of Ozark residents than that received by Winter’s Bone director Debra Granik. Still, we”d agree that the hills” poor soil engenders a flinty outlook.