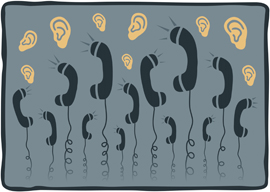 The Guardian, a high-minded leftist broadsheet, had been campaigning for years against Rupert Murdoch’s populist London tabloids. In 2007, private detective Glenn Mulcaire and News of the World royal editor Clive Goodman went to jail for “hacking” into the voicemail accounts of aides to Princes William and Harry. Their eavesdropping had netted such stop-the-presses bombshells as Will’s appointment to see a knee surgeon.

It slowly emerged that News of the World gossip hounds had illegally accessed the voicemails of innumerable newsworthy names. Yet outside of diehards hoping to take down Murdoch, nobody much cared, because the British public likes reading off-message jots and tittles about the high and mighty.

On July 4, 2011, however, The Guardian finally dredged up something that outraged tabloid readers: In 2002, Mulcaire had hacked into a missing 13-year-old girl’s voicemail. Worried that her mailbox would fill up and accept no new messages, the News of the World team deleted some old ones. This gave false hope to the parents that their daughter was still alive and checking her messages.

This wasn’t some celebrity’s hypocrisies exposed. This was an ordinary private family abused. In the subsequent uproar, the worm turned. Prime Minister David Cameron’s communications director and former News of the World editor Andy Coulson was arrested last Friday, and Murdoch shuttered the 167-year-old newspaper on Sunday.

Not surprisingly, the British public has greatly enjoyed reading all about it. Britain’s ruling class, however, hopes this scandal will neuter Fleet Street’s feistiness in favor of more respectful American-style coverage.

As you may recall (if only vaguely), numerous stars and moguls, such as Brad Grey, CEO of Paramount Pictures since 2005, paid sleazeball detective Pellicano to dig up—by any means necessary—dirt they could use against less-powerful people.

For example, when comedian Garry Shandling sued Grey—previously his agent and producer of Shandling’s The Larry Sanders Show—for triple-dipping into their profits, Grey, working with veteran super-lawyer Bert Fields, reportedly had Pellicano spy on Shandling. (The neurotic comic genius has only recently emerged from the long depression that this may have exacerbated.) I could go on citing famous showbiz names incriminated, but the American public mostly hasn’t wanted to know.