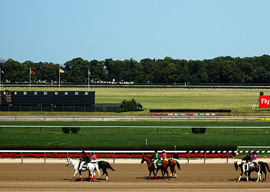 I was tempted to have a flutter on the Belmont Stakes last weekend. Not that I’m much of a horseracing fan. It’s only that I’ve been feeling exceptionally idle lately.

When in this frame of mind, my instinctive response to the prospect of starting a day’s work at my desk is to put off the evil hour for as long as possible. The desk, the computer, and the study repel me with a force well nigh physical. Driven at last by the prospect of hunger, and by pride, and by vanity, I’ll get there at some point in the morning, leaning into the repulsive force and pulling myself along by grabbing onto pieces of furniture, but meanwhile there are breakfast and the newspaper over which to be dawdled.

Newspapers are the procrastinator’s greatest friend. My own breakfast read is the New York Post. At normal times, when I am responsible and industrious—a model citizen, one of the sober busy professionals in a James Gould Cozzens novel—I read only the political news and Op-Eds, glance through the celebrity and business stuff, then head for the study to start my day’s work.

“Newspapers are the procrastinator’s greatest friend.”

When, however, I am in my present mood of obstreperous bohemian lethargy—Huck Finn’s Pap—I read the whole thing. Well, perhaps not every word. I skip the foreclosure notices and Sheriff’s sales, the ads for cars and sex aids, the horoscopes, and anything with “Kardashian” in the title.

I do read the obituaries, though. Post obituaries are very touching. They rarely concern anyone rich or famous, for which relief much thanks. These are real people: Agnes “Pat” Casey, “Waitress in New York City for many years”; George William “Buddy” Brown, “WWII Navy veteran, sheet metal worker”; Eugene B. Kirk, “School crossing guard in Dumont, NJ”; Dr. David H. Katz, “Retired dentist.”…

In the great scales of life, does not each of these honest folk outweigh by a factor of hundreds any Barack Obama, Newt Gingrich, or Anthony Weiner? Whom would you rather have at your family dinner table: Donald Trump or Gus DeVito, “Husband, father, grandfather”? (Whatever Gus did for a living was of so little lasting import his obituarist did not bother to mention it. Of how many of us could this be said? Ninety percent of paid work is time-wasting crap. The world gets by on the other ten.)

And then come the sports pages. Sports-wise, I’ll admit to being something of a black hole. I know American football’s rules from working on the chain crew at my son’s games, but I can’t work up any interest in the professional game. I keep up with the New York Yankees when they’re doing well, which they are recently not, and I always watch the World Series due to immigrant patriotism. Golf is for rich old guys, whose activities don’t interest me; and basketball is for Negroes, ditto. Lacrosse is for girls and homosexuals. NASCAR? Been there, done it.

That pretty much leaves horseracing. My mentor and guide here is Ray Kerrison, longest-serving of the Post’s turf correspondents. Ray was a general Op-Ed columnist when I started reading the Post a quarter-century ago. He turned out good curmudgeonly stuff with a reactionary Catholic twist I found appealing. He seems now to have been put out to grass (as it were) in the back pages there, writing stuff such as:

Pedigree? There isn’t a horse in creation bred better for the Belmont than Brilliant Speed. Steve Haskin, the Blood-Horse correspondent, delved into the horse’s bloodlines and came up with an astounding discovery. Brilliant Speed hails from a bloodline that has produced 15 Belmont winners. Here’s the incredible list….