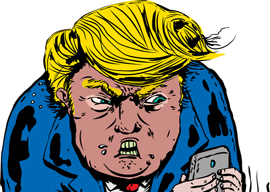 When a witch doctor reads the leaves in a sucker’s, I mean customer’s, teacup (a process known as “tasseography”), it’s essential that the mark, I mean “sitter,” has actually handled the cup. Say what you will about tea-leaf readers—call them charlatans, call them lunatics—they have ethical standards (so to speak). A witch doctor reading the tea leaves of a person who never handled the cup would be ostracized as a fraud among cranks (or a crank among frauds, I suppose). Nutty as they are, these loons still possess enough integrity to know that a tea-leaf reading for a person who never handled the cup would be malpractice (to whatever extent a practitioner of bullshit can engage in malpractice).

What does it say about the state of psychiatry in America today that dozens of accomplished psychiatrists and mental health professionals are refusing to abide by standards that even witch doctors believe to be both necessary and ethical?

Psychiatrist Bandy X. Lee of Yale School of Medicine’s Law and Psychiatry Division is enjoying her moment in the spotlight right now, because this ethically challenged headshrinker has been able to achieve something that lies beyond the reach of the average couch doctor—relevance in the news cycle. Last September, Dr. Lee authored a book titled The Dangerous Case of Donald Trump: 27 Psychiatrists and Mental Health Experts Assess a President (it can be accessed here for free…anyone insane enough to pay for the damn thing needs a good psychiatrist). The foreword is written by the Nazi-obsessed Dr. Robert Jay Lifton, because of course it is. I would have been disappointed had the foreword not been written by a guy who sees Nazis everywhere. If you visit the chimpanzee exhibit at the zoo, you expect to see poo-flinging, and if you don’t, well, it’s hard not to feel cheated. By the third paragraph of the foreword, Lifton has already mentioned “evil” three times, “Auschwitz” twice, and “Nazis” once.

Who better to take advice from than a psychiatrist who is unable to spot his own unhealthy obsession?

Lifton’s conclusion is that Trump is essentially a Nazi, and it’s up to America’s heroic psychiatrists to bring him down. And that’s pretty much the tone of the rest of the book (in what’s supposed to be a serious psychoanalytical tome, the name “Hitler” is invoked forty times). RealClearPolitics’ Carl Cannon suggests a more accurate title for the book: 27 Angry Democrats With Advanced Degrees Who Voted Against Trump and Say He’s Crazy Although They’ve Never Met Him. Ah, and there’s the thing! You see, technically, American psychiatrists are forbidden from doing what Lee did. Section 7 of the American Psychiatric Association’s Principles of Medical Ethics states:

On occasion psychiatrists are asked for an opinion about an individual who is in the light of public attention or who has disclosed information about himself/herself through public media. In such circumstances, a psychiatrist may share with the public his or her expertise about psychiatric issues in general. However, it is unethical for a psychiatrist to offer a professional opinion unless he or she has conducted an examination and has been granted proper authorization for such a statement.

“Some psychiatrists have apparently come to believe they’re psychic. Or wizards.”

In other words, when dealing with a public figure, a psychiatric professional may discuss mental health issues in general, but said psychiatrist may not offer a professional opinion about that individual unless an in-person examination has taken place and the public figure in question has authorized the psychiatrist to speak of it. Section 7 is often referred to as the Goldwater Rule, because it was implemented in response to the 1964 presidential contest between Lyndon Johnson and Barry Goldwater, during which a bunch of leftist psychiatrists decided to torpedo Goldwater by declaring him mentally unfit to be president (unlike LBJ, who was the very model of sanity). By and large, psychiatric professionals have respected the Goldwater Rule over the past fifty years…until Brandy X. Lee, because in her case, the rules just don’t apply. After all, she’s saving the world from Hitler, because she’s sane, and those of us who don’t see Hitlers hiding behind every Oval Office desk are the crazy ones.

Lee attempts to skirt the Goldwater Rule by invoking what’s known as the “duty to warn,” a legal concept that requires a psychiatrist to breach patient confidentiality if the doctor becomes aware of a clear, present, and impending risk to others posed by the patient. Putting aside the fact that Trump is not Lee’s patient and that they’ve never even met, Lee and the other contributors to her book argue that they have a “duty to warn” about Trump because he’s about to kill everyone on earth, or something to that effect (the phrase “duty to warn” is used 28 times in Lee’s book, five times in one paragraph alone on page 114). In response, the APA released an unambiguous rebuke of the notion that “duty to warn” applies in the case of a public figure like Trump:

The APA would also like to dispel a common misconception about the so-called “Duty to Warn.” The duty to warn is a legal concept which varies from state to state, but which generally requires psychiatrists to breach the confidentiality of the therapeutic session when a risk of danger to others becomes known during treatment of the patient. It does not apply if there is no physician-patient relationship.

In a perfect world, “armchair quackerback” Lee would have suffered some manner of professional consequences for violating the APA’s ethical guidelines. Ha, that’s a good one! Too many of her colleagues are also seeing phantom Hitlers. Lee’s no maverick, but rather a standard-bearer for mass hysteria. She was lauded in the pages of Psychology Today and featured as a guest on MSNBC and a dozen other news programs (watching her appearance on Democracy Now, I was struck by her abnormal breathing pattern, gasping for air every half sentence, which I have officially diagnosed as being caused by a lesion in her medulla, a condition that often causes irregular breathing patterns. Hey, Bandy, this remote-diagnosing thing is fun!).

Last week it was revealed that Lee had been invited by a congressional delegation to present her “findings” on Capitol Hill (and by “findings” I mean her casual observations while watching Trump on TV). Over a dozen lawmakers (all Democrats except one) feted Lee for sixteen hours over the course of two days, as she regaled them with her secondhand quackery. According to media reports, one goal of the meeting was to build a case for using the 25th Amendment to remove Trump from office.

Not only is Dr. Bandy Lee violating her profession’s ethical guidelines, not only has she decided to ignore the APA’s clear directive that “duty to warn” does not apply when there’s no doctor-patient relationship, but she’s apparently assisting an attempt to remove a sitting president from office. For Dr. Lee to inject herself into a partisan squabble the aim of which is to override the results of a U.S. election is shameful. But of course she has managed to rationalize her misdeeds. “From a medical perspective, when we see someone [Trump] unraveling like this, it’s an emergency. We’ve never come so close in my career to this level of catastrophic violence that could be the end of humankind,” she told Politico.

Here is a woman with a messiah complex; she thinks she’s saving the world. And once someone convinces themselves that they’re trying to save humanity itself, they become capable of anything, including betraying the rules of their profession.

Look, Trump’s no Calvin Coolidge. He’s a blowhard, a loudmouth, he’s impulsive, he’s egotistical (hell, we knew that going in). But it’s a mistake to put so much stock in the unprofessional (non)diagnosis of an attention-seeking doctor who thinks she’s mankind’s only hope for survival.

2018 is the year I turn 50, and I have a long memory. I remember with great clarity Dr. Helen Caldicott. Dr. Caldicott was an Aussie fruitloop who believed that President Reagan was going to blow up the world. In the ’80s, Caldicott ran an outfit called Physicians for Social Responsibility. Like Dr. Lee, she too had a messiah complex. She saw the world as a two-character play: her vs. Reagan. Sensible physician vs. psychopathic madman.

In 1983, she managed to wrangle a 75-minute meeting with Reagan. Note that that’s 75 minutes more than Lee has ever spent with Trump. Following the meeting, Caldicott announced to the world that she had “diagnosed” Reagan as having a “paranoid delusional” disorder. In a series of talks she gave throughout 1983 and ’84, she declared, over and over again, that if Reagan were to be reelected in 1984, nuclear war would become not only “inevitable,” but a “mathematical certainty.” Yes, she used that term. “Mathematical certainty.” Because, she swore, her 75-minute “diagnosis” was faultless. Trust her; she’s a doctor.

1984 is a world away from where we are now. Back then, psychiatrists were willing to speak out against Dr. Caldicott’s fearmongering. In October 1984, Harvard Medical School child psychiatrist Dr. Robert Coles told The New York Times, ‘‘When she [Caldicott] gets up and tells people it is a mathematical certainty you will be dead in four years if Reagan is re-elected, that makes people angry.” He accused Caldicott of inflicting psychological damage upon children with her scare tactics.

Where are any similar voices of integrity from the psychiatric field now?