Witchcraft: The Selfie of the Soul 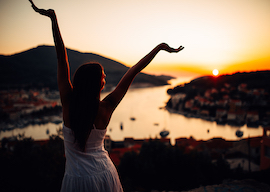 Like practically everyone else, I look at my phone or turn on my computer as soon as I wake to find out what has happened in the world in my temporary absence from it. You can always tell that nothing much has happened when the headlines are something like (as they were this morning) “Number of Americans who say they are witches is on the rise.”

In fact, such stories are much more interesting and important than “President of somewhere-or-other assassinated,” for they reveal, or at least give a glimpse of, the deeper currents in our societies.

According to the article, between a million and a million and a half Americans now “self-identify” (ghastly word!) as witches. Witchcraft or Wicca is now the fastest-growing religion—or is it a hobby, like crochet and philately?—in America and no doubt elsewhere in our crumbling civilization. It isn’t yet as common as tattooing, but one cannot help feeling that the two phenomena are related in some way.

The article was as interesting for what it didn’t say as for what it did. Indeed, one might almost assert of journalists, newspapers, magazines, blogs, websites, etc., that By their omissions shall ye know them. This is especially true in an age of political correctness and self-censorship such as ours, in which we are all afraid to bring the wrath of the ideologically disgruntled down upon our heads. Thanks to so-called social media, we have lost one of the most cherished freedoms of all, namely that of freedom from opinion.

But to return to the American witches, soon no doubt to be counted by the tens of millions if the rapidity of the spread of tattooing and other manifestations of mass bad taste are anything to go by. What was most significant was that the article gave no demographic breakdown whatsoever of the witches: For the author of the article (or perhaps the editor), a witch is a witch is a witch. Or at any rate, that is what he would have his readers believe, because he does not want to be accused of stoking prejudice. After all, the words witch and witchcraft, even today, have no very favorable connotations. No one says, “She’s a witch” meaning “She’s a very nice person with whom it would be a pleasure to have dinner.”

“Witchcraft isn’t yet as common as tattooing, but one cannot help feeling that the two phenomena are related in some way.”

It might be interesting to conduct a survey to establish how people imagine the demographic profile of the average or median American witch. For myself, I can only say that the image of Hillary Clinton comes irresistibly to mind: a million Hillary Clintons or more flying about on broomsticks! As the French say, Quelle horreur!

I imagine witches (predominantly female, of course, apart from a few emasculated male hangers-on, who do not even rise to the level of wizards) to have that facial expression of ruthless self-righteousness, or self-righteous ruthlessness, that la Clinton wears like a mask in the Noh drama. It would also be interesting to know the voting pattern of modern American witches; my guess (though I admit that it is no more than a guess) is that they are at least 90 percent Democrat. It is easy to imagine a “Witches for Hillary” committee, but rather harder to imagine a “Witches for Donald” one. Whatever else may be said about, for, or against Mr. Trump, he is unlikely to be popular among witches.

I daresay witches are, in a phrase I came to detest whenever any of my patients used it, spiritual without being religious. There was something self-congratulatory about the phrase, as if the person who used it were claiming both to be philosophically profound and morally good. People who are spiritual but not religious believe in the healing powers of ginseng and the Nazca Lines, and would like to dance naked around Stonehenge on the summer solstice, weather permitting. People who are spiritual but not religious give themselves permission to believe any nonsense they like of the more-things-in-heaven-and-earth variety and if you dare to challenge them would reply, “Well that’s my opinion,” as if such a declaration settled the matter.

Personally, I prefer black magic to white; at least it has a connection to a real human emotion, namely hatred. I can well imagine the satisfaction of sticking pins into effigies of one’s enemies (it might even be cathartic, if empirically ineffective), but not of the supposedly beneficent ceremonies of white magic.

I am aware that I am prejudiced, but that is not the same as being intolerant. As far as I am concerned, if people want to believe any kind of rubbish, let them. I daresay I believe quite a lot of rubbish myself, and my mind probably resembles a lumber room that hasn’t been cleared out for many years. Moreover, not all my actions are in accordance with my beliefs; between belief and action there is a great gulf fixed. Believe and let believe, say I.

I should like to know the educational level of the average or median modern American witch. I wouldn’t mind betting that it is above average, even well above average; no semiliterate slut could believe anything so silly. Say what you like about semiliterate sluts, but their feet are usually firmly planted on the ground. My guess is that there are more witches with degrees in art history than could be expected by chance.

On the day I read about the progress of witchcraft through the suburbs of America (I assume witches are middle-class), there was a story about a couple who fell to their death while taking a selfie. Apparently, the number of people killed while taking selfies is also on the rise (“Here’s me, on the runway of Seattle International Airport”). Witchcraft—and spirituality without religion—is the selfie of the soul. They are the beliefs of people who do not want to submit to anything larger than themselves, but do not want to be alone in the universe. They want to choose their own god in the spiritual supermarket, in which the highest truth is what I choose as valid for me, in the way that I prefer this to that brand of kitchen towel.