With Love From Harry’s Bar 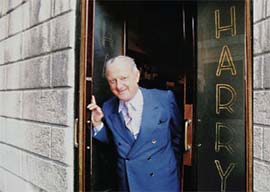 It is quite possible that my favorite restaurant in the world is Harry’s Bar in Venice. For one thing, it is the home of the best club sandwich in the world. At this point in time, it is one of the few things on the menu I can still afford. (Believe me, it’s not your normal club sandwich.) The whole atmosphere of Harry’s Bar is exciting, yet conservative. The waiters, the chefs, the bartenders—all are masters at their trade. At the top of the list is the owner and host, Arrigo Cipriani. When he’s there, which is often, he’s on the floor, including upstairs, working alongside his staff. He’s a man of few words, but with a knowing smile and nod, he says it all.

A branch of Arrigo’s restaurant empire is in New York, an intimate yet boisterous place called «Harry Cipriani». It’s in the Sherry-Netherland hotel on Central Park. I think of it as the power lunch capital of Manhattan, a world away from Venice to be sure. And yet, it is a little piece of Venice, an outpost of Harry’s Bar, if you will. I don’t hang out there; it can be a bit intimidating. Some of the clientele are not my type. I’m more at home in Venice.

One of the many things I admire about Arrigo, in addition to his custom-made suits which he designs himself, is the fact that he’s no phony. He’s an authentic person, an old-world Venetian. This puts him in a special category. I mean, just by being a true Venetian. Come to think about it, Venice is probably my favorite city in the world, as well. Anyway, whenever I’m lucky enough to be there, I drop by the flagship of Arrigo’s empire, Harry’s Bar. As with most of his loyal customers, Arrigo greets me soon after I manage to squeeze though the narrow door, or as soon as he spots me. There’s nothing fake about the greeting. Arrigo knows and values his customers. Anyway, I made contact with him a few days ago, to inquire about the goings-on at the Venice film festival. He chose to follow up with a few words in writing. Here they are…

The Lido of Venice, one of the most famous islands in the world, is a narrow strip of land five miles long between the Adriatic and the Lagoon. On the south side are the beautiful sandy beaches which offer a protective shelter to the rich and famous, and a smooth landing to the waves of the Adriatic. The north side has no waves; just a breathless view of Venice and the reflection of its incredible palazzos in the calm waters of the magical pond.

In 1932, a tycoon by the name of Mr. Volpi, soon to become Count Volpi as a reward for his fascist virtues, decided to have, within the Biennale of Contemporary Art which existed since 1895, also an international film festival, which has come to be known as the International Exhibition of Cinematographic Art. Talking movies had recently started, and Volpi’s idea was far-sighted. This is the 67 year of the event and, as usual, it is under attack from the critics and the people.

In truth, the Biennale is, every time, both in art and in film, the mirror of the world’s status at that moment. There have been glorious times and very bad times, but what we observe is nothing else than what art consists of at present. The production of artists shows exactly what is going on in our globe, whether we like it or not. There have been years when masterpieces were revealed; and others that have produced nothing but garbage…

During the morning hours and at lunch, the imposing Hotel Excelsior, a construction of the thirties in the Moroccan style, is the headquarters of the film stars, the many journalists, and the supporting cast. The Excelsior is a classic, five-star resort, a truly wonderful place to stay, with a view over the Adriatic. But Venice itself, not the Lido, is the hero of the show at night. There are hundreds of parties in the palazzos, big and small, sponsored by fashion firms and famous magazines. Everybody wants to be invited. And then, at least once or twice during the ten-day extravaganza, everybody has a rendezvous at Harry’s Bar, the Venetian landmark of eighty years…

This year, Quentin Tarantino is the President of the jury. Not just a great film director; he is the man who knows more about movies than anybody else. On the last day, the jury unanimously voted for Coppola, first name Sofia, the daughter of Francis Ford Coppola. She is the first woman to win the Golden Lion in 67 years! Her movie is titled «Somewhere». It tells the story of Johnny Marco (Stephen Dorff), a successful actor in Hollywood, who carries on his empty life by racing Ferraris, living at the Chateau Marmont, having sex and taking drugs, until the day he encounters his daughter Cleo (Elle Fanning). She is able to escort her father out of his lethargy and depressed state.

Sofia Coppola is a master at showing the special atmosphere between father and daughter. The movie is simple and minimalist, surrounded by a subtle sense of humor. Sofia has a special, delicate talent of making her point by subtracting rather than adding. And then, the music of «Somewhere» is beautiful and the actors are fantastic.

After the jury awarded the Golden Lion to Sofia for best picture, everybody moved on to the grand Excelsior Hotel to attend the special gala dinner. Everybody that is, except Sophia and her happy friends. They all went to dinner at Harry’s Bar, their favorite place in Venice.