Women Against Feminism: Are These Bitches Crazy? 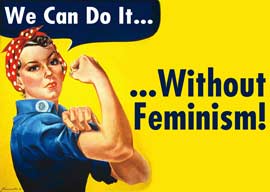 Latter-day feminists”who are an entirely different and far more hostile breed than those of only a generation ago”will naturally deny that they seek anything beyond equality, but these squaws speak with forked tongue. If they cared even one lone curly pubic hair about equality, they wouldn”t openly pooh-pooh glaring statistical gender disparities in suicide, homelessness, education, prison sentencing, workplace deaths, custody disputes, spousal support, and longevity. They wouldn”t loudly deny the existence of false rape accusations and the currently unmentionable ubiquity of female violence toward men. They wouldn”t dub sexually aggressive women as “empowered” while slamming men who merely make suggestive comments as rapists.

They”ll bitch about a paucity of female physicists while overlooking a surfeit of female psychologists, nurses, social workers, and especially teachers. And you never seem to hear them complain that there aren”t nearly enough female coalminers, janitors, or sanitation workers.

They”ll even disingenuously claim that this illusory “patriarchy” harms men, too, which would make it a rather inept patriarchy, no? What’s the purpose of having a patriarchy in the first place if it doesn”t benefit men?

In 2001, novelist Doris Lessing bemoaned the castrating vagina dentata hose-beast into which feminism had metastasized:

We have many wonderful, clever, powerful women everywhere, but what is happening to men? Why did this have to be at the cost of men?… The most stupid, ill-educated and nasty woman can rubbish the nicest, kindest and most intelligent man and no one protests. Men seem to be so cowed that they can’t fight back, and it is time they did.

Mein Gott, “tis like a balm for my beleaguered, testosterone-addled soul to see all these egg-laying mammals who “get it.” It’s like a splash of fresh female pheromones to behold women who have no problem with being women and with men being men. They see essential gender differences as a biological reality and not a false “social construct” that needs to be smashed beyond recognition. They realize that women are human and thus can be every bit as nasty as men. They don”t allow themselves to be frightened into silence by a small screeching cabal of power-crazed, gynocentric shrews with a clearly malicious anti-male “vagenda.” They view men not as a born enemy but a potential dance partner. They understand that female happiness need not be predicated upon male misery.

So are these “Women Against Feminism” chicks crazy? No, not one tiny bit. It’s what they”re fighting that’s insane.