Women and Democracy in the Middle East 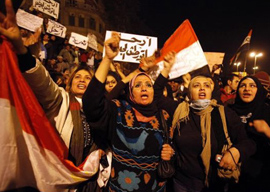 One of Israel’s finest journalists, Gideon Levy, wrote in the daily Haaretz, “Just as there is no such thing as a partial pregnancy, there is no such thing as a partial democracy, either.” Despite how Israel pats its own back for being the Middle East’s only democracy, it is not a democracy because millions of its people are under the state’s control. Israel denies democracy to millions of Palestinian Arabs. If the Middle East is to establish genuine democracies, not partially pregnant regimes, it must make its women full citizens.

No one, not even the most savage dictator, publicly opposes democracy. The least-democratic regimes construct democratic faÃ§ades (rigged elections, government-funded fake opposition parties, minorities represented by tokens, and communications media that are free only to praise the leadership) to conform to the contemporary orthodoxy. The people of Iran, Libya, Iraq, Bahrain, Yemen, and Algeria are demanding democracy, even if some of them mean a half-democracy that denies full rights and equality to women.

“If the Middle East is to establish genuine democracies, not partially pregnant regimes, it must make its women full citizens.”

One of the most encouraging features of the demonstrations against Hosni Mubarak in Cairo’s Tahrir Square was the full participation of women. From the television coverage, it often appeared that women”young and old, veiled and scarf-free”were half of those on the front lines. The veteran women’s-rights campaigner and writer Nawal El Saadawi said, “In the square, I felt for the first time that women are equal to men.” Mrs. Saadawi has been fighting for Egypt’s women for about fifty years, and she has seen the inside of Egyptian prisons under both Anwar Sadat and Hosni Mubarak. Her testimony, based on years of sacrifice and observation, indicates that an emerging Egyptian democracy cannot go forward without women. It is significant that the army, the last bastion of the old order in which much of the populace and the US government retain faith, did not appoint a single woman to the body rewriting the constitution.

A better omen for women is that none of the uprisings in Tunisia, Egypt, and Libya, nor the concessions wrung from the Bahraini royal family and the Saudi treasury, were won by suicide bombers or Islamist radicals. The eminent columnist William Pfaff wrote:

[T]he evolution of Arab society has left them behind. Education (including women’s education), opportunity and globalism have transformed the young elites of all but the most backward countries. Their problems are not ones for which the Muslim Brotherhood has answers.