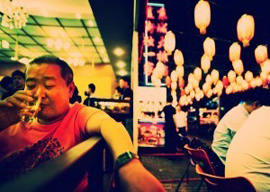 The war between the sexes is fought on many fronts, some of them very far away.

There’s a report from one of those fronts in the January 2013 issue of The China Journal. The writer is Katherine A. Mason, billed as “Lecturer in Health and Societies in the Department of History and Sociology of Science at the University of Pennsylvania.”

Her topic is banqueting, more specifically toasting”a key feature of Chinese social life. In a low-trust society such as China’s, “social life” includes all work relationships. Bonds within and between “work units” are formed and maintained by getting drunk at banquets. Only thus, it is believed, can one establish true sincerity“a central concept in Chinese life since the Age of Philosophers.

Thus one of Ms. Mason’s Chinese respondents tells her that:

In China, if you want to do anything, you need to talk first. There are a lot of opportunities for talking, but timing is everything…[The] opportune moment is usually when you’re drunk, falling-down drunk…or even losing consciousness, at least when your consciousness is not so good”at these times the distance between people is very short. And then when you tell him something, he’ll think, “this is my friend,” and he’ll remember.

“You haven’t made any connection with Chinese culture until you’ve toasted yourself blotto at a Chinese banquet.”

The toasting ritual is described in gruesome detail:

The host opened by leading a toast of everyone at the table. After a suitable period, the host then toasted the highest-ranking guest for the first time, standing up and saying nice words about their friendship and the bright future of their partnership, and both emptied their glasses. Then the rest of the people at the table toasted the guest. After toasting the guest of honor, each person at the table had to toast each other person at the table individually, usually starting with other important guests, the primary host and other leaders, and working their way to less important guests or colleagues. Once a banqueter toasted someone, that person was then obliged to toast back. If the banqueter toasted the person twice, the other person generally had to toast the banqueter twice, and so on.

As a general rule, in toasting someone else, it was essential to empty one’s glass….

All this is being done with stuff that is, just scanning the excellent selection of Chinese liquor in my cabinet here, from 100 to 112 proof. (Western liquor is typically about 85 proof.) There is a common belief that the Chinese are not great drinkers. This is nonsense. You haven’t made any connection with Chinese culture until you’ve toasted yourself blotto at a Chinese banquet. Then “the distance between people is very short,” true sincerity emerges, bonds of guanxi are formed or strengthened, and things can get done.

Ms. Mason’s problem is that this is all very male. Women have been flooding into the professions in China during the past twenty years. Because of these well-established drinking rituals, they are encountering a glass”perhaps that should be “bottle””ceiling:

Neither willing nor, in many cases, physically able to imbibe alcohol in the manner of men, women found their ability to advance in their careers and to pursue their own health and happiness to be hampered by the overwhelming imperative to drink.

As in the Wild West, British India, and marriage, the gals are civilizing the men by shaming their male-bonding rituals out of existence:

In the urban centers of the Pearl River Delta, women working in government-affiliated public health work units regularly participated alongside men in banquets and toasting rituals. By drawing attention to the unhealthy and undesirable aspects of banqueting for participants and its negative effects on their work and their careers, however, these women redefined heavy alcohol consumption as a morally deficient act….