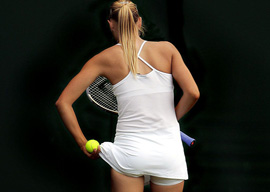 I’ll let you in on a secret jealously guarded by the God of PC: Equal prize money for men and women at the Grand Slam tennis tournaments is an insult to every principle of fairness—including equal pay for equal work. The pay is equal; the work isn’t.

Every ex-pro doing TV commentary knows this. But tennis commentators also know how the cookie crumbles. One un-PC strike and you’re out, especially when comparing the women’s game to the men’s. Only once did John McEnroe let the cat out of the bag. Pestered for the umpteenth time about how he’d do against Serena, he said that any full-time male player could beat any woman. When similarly queried about women’s tennis, French veteran Guy Forget reportedly shrugged and said, “C’est une autre chose.” A different thing then. It’s only the prize money that’s the same.

I’m not one of those curmudgeons who begrudge athletes their incomes. The world’s best at anything should be—and always have been—properly rewarded. The 128 men vying for the €1.2 million top prize at the ongoing French Open are among the best in the world, and so are the players competing in the various junior and senior age groups. But if we believe McEnroe, and he knows his tennis, their women colleagues are nowhere near the top couple of thousand, and yet even a first-round loser went home with €25,000—a little more than Britain’s average annual income.

As I write this, Sky TV pundits, including Mats Wilander, Frew McMillan, and assorted British ex-pros, are negotiating their way around numerous sensitivity traps. With the same footloose dexterity they used to display on the courts, they heap superlatives on every routine put-away by a female player while trying to ignore the kind of shortcomings that would shame my club doubles partner. Still, occasionally they let things slip.

“Female players who look good in or out of clothes can have lucrative careers without having to hit tennis balls all that well.”

Thus Chris Wilkinson (once a quarterfinalist at Wimbledon) on Maria Sharapova: “She doesn’t know how to brush the back of the ball to get topspin on her second serve…not much feel at the net…can only play one way…no Plan B….” And Mats Wilander, seven-time Grand Slam winner, on Caroline Wozniacki, world No. 1: “Her slice isn’t a professional stroke…no real weapons…needs to learn to hit with more pace….”

Other commentators wouldn’t be outdone: “Can’t move as well as the men…few can volley…don’t play with much imagination…don’t know how to hit a topspin serve…she doesn’t look like a natural athlete….” Hardly a women’s match goes by without the commentator making the kind of helpful suggestions one would expect from a club coach paid £30 a hour to teach a novice to take his racquet back early.

Whenever we compare men and women players, we must allow for the natural physiological differences: Men are stronger and faster. Though a tennis stroke is a matter of timing more than musculature, we shouldn’t expect a woman to hit a serve at 150MPH or a forehand at 110. However, there’s no physiological explanation for why women can’t develop the same technique as the men. They just can’t.

Tennis is a highly technical game. Add together the choice of three basic spins on the forehand, backhand, and serve, consider various volleys, half-volleys, lobs, service returns, and drop shots, and you’ll get at least 25 strokes making up any good player’s essential repertoire. Every man in a major’s main draw can hit each one of these 25 strokes well. Perhaps not equally well: Many players make their living on the baseline and aren’t natural at volleying. But they can all volley competently when made to do so.

How many of these 25 strokes have most of their female colleagues mastered? In broad numbers, three: flattish first serve and two flattish ground strokes. That’s why their matches resemble rallying practice sessions accompanied by feral shrieks: thump-shriek-thump-shriek-thump into the back fence-squeal of a mortally wounded animal. No attempt to construct the point, no flair for the unexpected, no discernible strategy—just thump and shriek.

To be fair, there are exceptions. Francesca Schiavone has most shots. Samantha Stosur can kick her second serve. Vera Zvonareva knows how to work a rally. And stroke-for-stroke, the recently retired Justine Henin was at least equal to any man—with her backhand superior to most. But these exceptions prove the rule: Most women either can’t or won’t develop a well-rounded technique.