Wonder Woman and The Jewish Question 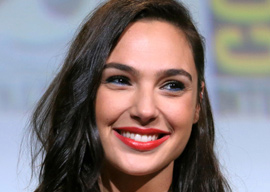 “The Jewish Question“ is a phrase that has been around since at least the 1750s, and it is deceptive in its simplicity. There are so many questions one could ask about Jews, it’s more like an exam than a question.

It’s a slippery question. Others would say it’s sloppy. Still others would allege that it’s slimy. But the question reared its yarmulke-wearing head yet again recently when an absolutely unnecessary blog entry from comic-book nerd Matthew Mueller insisted that Gal Gadot, who plays the title role in this year’s Wonder Woman movie rehash, is INDEED a “person of color” because she “is not actually Caucasian, but is in fact Israeli.” This is supposedly important because “much more representation of color in movies and television is necessary” for reasons that Mueller leaves entirely unexplained but apparently embraces as if they were etched on stone tablets from Mt. Sinai. He says that even though People of Color and the Colorless People Who Enable Them would prefer to see a much darker Wonder Woman, at least this one’s a Jew, so they should be happy she’s not a white girl, because white girls and not, um, Israelis are overrepresented in Hollywood.

“In the modern scheme of things, there is nothing wonderful about being white.”

Writing in the Forward, the unmistakably Jewish Joel Finkelstein asks, “Are Israeli-born actress Gal Gadot And Other Ashkenazi Jews White? The Answer Is Complicated…And Insidious.” Apparently it’s “insidious” because it links Jews to all the evil, horrible, awful, nasty, oppressive, and downright mean things that everyone knows white people have done over the ages, especially to Jews. Finkelstein”without referring to graphs or statisticians”asserts that anti-Semitism “is the largest and most systematic global operation of persecution ever launched against a single people,” so to assert that an Israeli Wonder Woman is white is to basically call her Hitler.

Also writing in the Forward, the never-gonna-be-mistaken-for-a-Protestant Noah Berlatsky encourages Jews, even ones who identify as white, to “side with the marginalized,” because you never know when those white people are going to rise up and start baking people in ovens again.

According to a study from the Pew Research Center, 94 percent of Jewish Americans identify as white. And according to a post-election article in The Atlantic that also wondered whether Jews are white and whether they should be afraid of Donald Trump, “Three-quarters of American Jews voted against Trump.” The article also quotes Anti-Defamation League CEO Jonathan Greenblatt alleging that Jews are more than a religion and instead share a genetic background: “I think there is this sense of shared struggle…programmed into the DNA of the Jewish people.”

DNA? Wait”aren”t they a religion rather than a race? It’s a sticky question. If being Jewish is merely a religious thing, explain the pervasiveness of self-identified Jewish atheists. Explain why “anti-Semitism” is almost always framed as racism rather than religious bigotry. If it has nothing to do with ancestry, why is Israel considering genetic tests to determine Jewishness in applications for citizenship?

In his often misquoted and misrepresented passage on the “Big Lie” in Mein Kampf, Adolf Hitler”I”ve heard he’s unpopular”said that the “Big Lie” was that Jews were merely members of a religion rather than an ethnic tribe:

Is not their very existence founded on one great lie, namely, that they are a religious community, where as in reality they are a race? And what a race!

On an episode of Donahue, Jared Taylor of American Renaissance famously said that Jews “look white to me,” earning him the eternal scorn of white nationalists who argue that the primary source of anti-white animus in the world these days comes from Jewish finance, media, and education.

Maybe the bigger question is not whether white people consider Jews to be white, but whether Jews consider non-Jews to be Jewish, a question that answers itself. They don”t. How often have you heard someone Jewish make a point of the fact that unlike Christian evangelicals, Jews don”t smack you in the face with their religion and don”t try to convert anyone because, quite frankly, they don”t need nor want them?