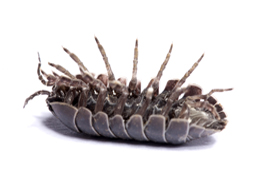 There is no better or more salutary way of reminding yourself of your own profound and irreparable ignorance than to browse in a well-stocked secondhand bookshop. It is also a way to overcome misanthropy, if to such you are inclined, for you cannot help but admire your fellow beings who have, over the centuries, accumulated so much knowledge about so many things. In our day-to-day avocations, we tend to forget (if ever we knew) just how much we are the beneficiaries of our predecessors, how much we stand not only on the shoulders of giants, but on the shoulders of laborers in the vineyard. If you were to live to be a thousand, you could not absorb a hundredth of the knowledge in one such bookshop, let alone that contained in a large library. Churchill said of Clement Attlee that he was a modest little man with much to be modest about; but in fact we all have much to be modest about.

Yesterday, for example, I browsed in such a store and came across a book in a series titled Invertebrate Types. It did not refer to current British politicians, as might have been appropriate, but to small animals without backbones. The particular volume was devoted to woodlice, common little creatures to which most of us do not, I think, devote much thought.

Opening the book at random, my eyes fell on the following sentence: “Because the cuticle is porous and never dry, woodlice are exceedingly difficult to mark with paint, which tends to flake off.” Until then, I had been blissfully unaware that anyone had ever tried to mark woodlice with paint, let alone had encountered difficulties in doing so. I decided to learn more about woodlice and bought the book.

I have been aware of the existence of woodlice ever since I can remember, but I am ashamed to say that I took them entirely for granted, expressing no curiosity about them whatsoever. They were just there, under stones or leaves when you disturbed them. I knew so little about them”though I must in my life have seen them by the thousands”that I was unaware even of how many pairs of legs they had.

Practically everyone, I should imagine, can recognize a woodlouse when he sees one; but it would be interesting to conduct a survey to discover what proportion of the population knows how many pairs of legs woodlice have. I suspect it would not be more than one in a thousand, perhaps far fewer (the answer, by the way, is seven). In other words, we are like Dr. Watson: We see, but we do not observe.

The book was published in 1972, and no doubt woodlouse science has progressed enormously since then: Knowledge about everything (except good and evil) has increased exponentially. But even by 1972, a vast amount was known, and the author, S.L. Sutton, seems to have devoted his career to the study of these generally overlooked creatures”which, by the way, are land-living crustaceans, a somewhat unusual group, biologically speaking.

We are often asked what we would do if we had to live our life over again, and I am tempted to reply that I would like to have been an entomologist. (Woodlice are not insects, of course, but for all practical purposes it is entomologists who study creepy-crawlies such as spiders, scorpions, millipedes, centipedes, worms, etc.) The fact is that it is the insects that will inherit the earth. I have seen the future, and it is six-legged.

But I also know that, temperamentally, I do not have the patience of minute particulars, as William Blake called them, to be an entomologist. For example, to distinguish one species of woodlouse from another it is sometimes necessary to dissect a male and examine its genitalia under a microscope, a task that would not long hold my interest. But far from despising those whose interest is captivated by such tasks, I am full of admiration for them, and for all those who, by their patient researches, elaborated the rational taxonomy of woodlice. And this, of course, is only the minutest fraction of the totality of human learning. One is, or ought to be, humbled by it.