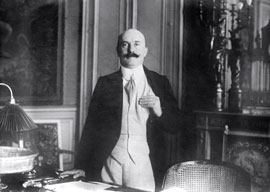 By the time August rolls around there will be hundreds of books, thousands of articles, and millions of words spoken by mostly pompous people about who was responsible for starting World War I. The Brits were the first off the mark to blame the Germans. They would, wouldn”t they? Max Hastings, a very good English historian who affects upper-class mannerisms (his father was a tabloid hack) and has the most extraordinary accent in a desperate effort to show he’s a blueblood, was among the first to produce a book and place the blame where it doesn”t belong. Among the few who got it exactly right is Christopher Clark, whose The Sleepwalkers hit the proverbial nail you-know-where. The irony is that the sixteen million dead, the disappearance of the great royal dynasties and of the upper classes, and the birth of communism and Nazism could all have been avoided if a certain Joseph Caillaux had kept his pants on. Let me explain.

Caillaux was French prime minister and a friend of Germany’s. He mistrusted the British who ruled half the world. He decided that Germans should not build a larger navy lest they get any big ideas about having an overseas empire like perfidious Albion. He had stepped down in 1912 and was running against a warmonger in the 1914 elections. In early 1914, Le Figaro, France’s most respected newspaper, published an exposÃ© of the affair of Monsieur Caillaux with a certain Madame Henriette. (Plus Ã§a change, as they say in the land of cheese.)

Madame Caillaux, known for her elegance and noble breeding, had herself driven to the offices of Le Figaro and asked to see the editor. He was out to lunch, so she waited in his office. As soon as he entered, she greeted him politely, announced her name, took out a revolver from her gilded purse, and shot him dead. She was immediately tried and exonerated”the French called it a crime passionnel“but her hubby had to resign. The warmongering Raymond PoincarÃ© remained in power.

Gaston Calmette, the dead editor, was the first man to fall, but you won”t find his name among those who fell on the “Champs d”Honneur,” or field of honor. All but a few of the French aristocracy were wiped out, but even more nobles died on the German side. The British upper classes also lost big time, but not as many as the Germans and the French. The irony is that the much maligned Kaiser Wilhelm”a nut to be sure, but a silly nut”refused to believe a war would break out between his cousin George V and his other first cousin Nicky, who ended up murdered along with all his family by the reds in a cellar. An even bigger irony is that Germany did her utmost until the last second to avoid going to war.

Here it is nice and simple. Serbia is an Austrian dominion, or whatever you want to call it. She is part of the Austro-Hungarian Empire. Crown Prince Franz Ferdinand visits Sarajevo and is shot dead along with his wife by a Serb nationalist with close ties to other Serb nationalists in the armed forces. Austria is outraged and makes heavy demands, as well she should. This is stretching it, but let’s have some fun. What would Uncle Sam have done if, say, Hillary and Chelsea Clinton had been cut down by some extremist in Puerto Rico? Well, I for one would vacation in San Juan the next day, and I”d spend lots of money too, but then I am known to say and do rash things. So the Serbs ask the Russians for help and guarantees in case the Austrians march in, and the Russians give it. The trouble is that the Russkis have a treaty with the French and the British that if they go to war, the other two will follow. So the Austrians ask the Germans for a guarantee and the Germans refuse to give it.