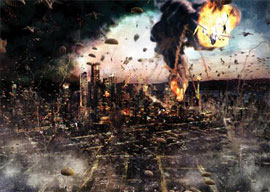 With the 100th anniversary of World War I upcoming and old enmities between America and Russia resurging in contemporary form”for example, Glenn Beck recently said, “I will stand with GLAAD against…hetero-fascism” in Russia”due to the approach of that gayest of sporting events, the Winter Olympics, I thought it worth taking a look back at the war that didn’t happen: the one between NATO and the Warsaw Pact.

So I dug out my battered copy of Sir John Hackett’s 1978 sci-fi novel, The Third World War: August 1985, which scared the hell out of me when I received it as a Christmas present on December 25, 1979, the day the Soviets invaded Afghanistan. In response to the invasion, Jimmy Carter canceled American participation in the 1980 Moscow Olympics and instituted draft registration.

This bestseller is little remembered today, although its dry, logistics-oriented tale pleading for more defense spending has enjoyed an odd afterlife by inspiring Max Brooks’s zombie apocalypse novel World War Z that became last summer’s Brad Pitt blockbuster (which has provided me with no end of punning titles such as “World War G” and “World War T”).

“While not a wholly accurate prophecy (fortunately), The Third World War turned out to be one of the more effective books in history.”

General Hackett was an Australian-born scholar-soldier in the tradition of T. E. Lawrence. During World War II he was wounded in Syria and North Africa before leading the 4th Parachute Brigade drop behind German lines in the epic failure at Arnhem (as memorialized in the movie a A Bridge Too Far). After four months, he escaped.

In the late 1960s Hackett commanded the British Army of the Rhine, where he was appalled that NATO didn’t have the conventional military strength to repel a Warsaw Pact invasion without resorting first to nuclear weapons. In early 1977, near the nadir of Anglo-American resolve, the retired Hackett gathered six friends to help him write a book-length account of a 1985 donnybrook between the Red Army and a substantially strengthened NATO.

Spoiler Alert: We win, but only because we started rearming in the late 1970s.

As a page-turner, The Third World War is less than scintillating. The book begins with a few vignettes of the first day of fighting but soon devolves into a headquarter staff officer’s view of battle.

Tom Clancy’s 1986 bestseller Red Storm Rising is a more vivid read, in part because of Hackett’s military training. Hackett saw infinitely more combat than Clancy, but battle in 1980s Europe would have been such a horrifying metal storm that the best mental refuge was into military abstraction. As historian John Keegan explained in The Face of Battle, military drilling is intended to promote the opposite of literary imagination:

…the rote-learning and repetitive form and the categorical, reductive quality of officer-training has an important and intended”if subordinate”psychological effect. Anti-militarists would call it de-personalizing and even de-humanizing. But given…that battles are going to happen, it is powerfully beneficial. For by teaching the young officer to organize his intake of sensations, to reduce the events of combat to as few and as easily recognizable a set of elements as possible, to categorize under manageable headings the noise, blast, passage of missiles and confusion of human movement which will assail him on the battlefield, so that they can be described”to his men, to his superiors, to himself”as “incoming fire,” “outgoing fire,” “airstrike,” “company-strength attack,” one is helping him to avert the onset of fear or, worse, of panic….

I spent a fair amount of time in 1980 pondering what battle on the Rhine would be like for me personally, and panic seemed the most likely and natural reaction.

Any would-be Hari Seldons confident they can write future history should note the numerous events that the seven British insiders didn’t get quite right about the actual 1985. For example, the Shah of Iran emerges from clearing Soviet allies from the Persian Gulf almost too strong for his North Atlantic friends’ liking. In our world, however, just eleven months after Hackett and friends finished their manuscript the Shah fell to the Ayatollah Khomeini, whose unexpected irruption into modern history always reminds me of the unplanned-for Mule in Isaac Asimov’s Foundation series.

On the other hand, although The Third World War didn’t foresee the election of a Polish Pope in October 1978, Poland is properly central to its storyline anyway.

Rereading The Third World War after 34 eventful years, I’m surprised by how much Hackett and colleagues got right. They portray the future Soviet empire in the mid-1980s as muscle-bound but brittle, in imminent danger of falling apart into its score of constituent nations unless the Kremlin can keep ginning up foreign-policy triumphs to overawe potential separatists within its walls. But the Soviet Union’s weaknesses make it potentially dangerous.

Moreover, Hackett and friends rightly identified Poland as the key domino that would undermine the Soviet empire in the 1980s and little pro-Western Slovenia as its equivalent within Yugoslavia. Most importantly, they correctly predicted a revival of “national self-respect” in the West. That their book sold three million copies stands as both effect and cause of that fortunate development.

The Third World War‘s plot seems plausible enough in retrospect: Anti-Soviet unrest in Poland leads Moscow to attempt to bully neutral post-Tito Yugoslavia back into the fold. To aid secessionists, the Republican president dispatches a few US Marines across the Italian border into Slovenia, where they unexpectedly stumble into a firefight with Soviet armor.