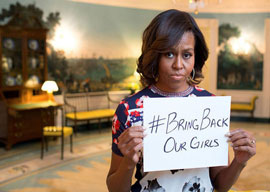 Have you Tweeted, Facebooked, YouTubed, Instagrammed, or LinkedIn (LOL) your hatred of Boko Haram yet? If not, why not? What is wrong with you?

Scowling through social media at the Islamist crazies who kidnapped 276 schoolgirls in Nigeria is all the rage. Everyone’s at it, from the FLOTUS to the inhabitants of Celebville to civilians who love the idea of being part of a political movement that demands nothing more of us than that we pound out the occasional Tweet and take sad-eyed selfies.

You could literally stay in your pajamas all day, watching TV and gorging on Doritos, and still be a key member of the BringBackOurGirls movement. Just so long as you have in the palm of your hand a gadget that allows you to use your thumb”hard work, I know”to remind the world every couple of hours that you”re still upset by the absence of these girls.

The amateur does his Boko Haram bashing with a Tweet, always careful to include the BringBackOurGirls hashtag (while never making clear what political force he wants to do the bringing back, or how on earth these girls came to be “ours”).

But the pro does it with a photo of him- or herself holding up a placard with the hashtag emblazoned across it. This is the best way to register your disgust with Boko Haram, because it allows people to see your face so they can appreciate how pained and wonderful you are.

“In lieu of enthusiastic local support, or of anything resembling a coherent ideology, the new globally minded, violence loving Islamic sects rely for their existence on the fame and notoriety granted to them by a monster-hungry Western media.”

Michelle Obama gave a master class in the politics of holding up placards on the Internet with her wildly shared BringBackOurGirls mug shot. The lightly furrowed brow, the wide eyes asking “Why?!”, the disapproving pout … The eye is immediately drawn to Michelle’s face rather than to the placard in her hands”which is the whole point of this webby phenomenon. Don”t bother to take to the streets to wave placards with thousands of other people, like we used to do in the old days; just hold one on your lonesome indoors while a technical timer snaps a pic. “Look at me … no, up here, at my face! See how tortured I feel about that bad thing that happened?”

Now we even have political photobombing. Last Sunday on a British political chat show, Christiane Amanpour, CNN’s chief international correspondent, asked UK PM David Cameron to hold up a BringBackOurGirls placard. He did (of course he did”it’s pretty much a crime against humanity not to), but Ms. Amanpour refused to let go of the placard; she kept a grip on one side of it, no doubt conscious that this image would travel through the Twitterverse, and keen to ensure that her practiced political pout would travel with it. And so has Ms. Amanpour promoted herself to the premier league of Internet faces made angst-ridden by Boko Haram.

Some are starting to criticize the hashtag politics of the BringBackOurGirls pseudo-movement, on the grounds that “it won”t bring back our girls.”

But they miss the point. The aim of BringBackOurGirls is not to bring back those girls. It has very little to do with Nigeria, in fact. The point is not to achieve something measurably progressive in the real world, but rather to draw attention to our virtual personas, to our virtual selves, to our own capacity to hurt and show willingness to advertise that hurt. It is Oprah-ite emotional literacy dolled up as radical politics.

The BringBackOurGirls frenzy is entirely in keeping with the narcissism of most modern-day social activism. Just as AIDS ribbons are more about drawing attention to oneself than about curing AIDS”just as the recent fashion among men for photographing their cocks in a sock to raise awareness of testicular cancer was really a way for them to show off their gym-buff bodies”so the selfies for Nigeria are all about making a big, fat, re-Tweetable advert of how emotionally switched-on we are.

But the Boko selfies also unwittingly display how alarmingly individuated and ephemeral our activism has become. Where once politics were about individuals forming a crowd to demand a real thing or policy, now we stay home and pull sad faces into our webcams for other individuals to look at, not giving a thought to whether any of this will change anything. It’s the classic lonely crowd”people virtually gathered together but fundamentally all alone.

But just because the BringBackOurGirls movement won”t bring back those girls, that doesn”t mean it won”t have an impact on the world at all. It will; it has already, in fact, and the impact has been entirely negative.

For what this narcissistic posturing against the evils of Boko Haram has done is given Boko Haram everything it ever dreamed of. It has provided this most nutty and eccentric of Islamist groups with copious amounts of the main fuel that drives such outfits: Western outrage.