Wrestling Gets Tapped Out of the Olympics 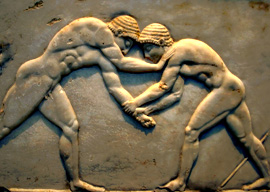 The sport of wrestling has suffered a slow decline over the last 100 years. Professional wrestling was a legitimate and popular sport in the United States 100 years ago. Gladiators such as Frank Gotch, George Hackenschmidt, and Stanislaus Zbyszko were the sports superstars of their era. The late 1920s saw the bastardization of pro wrestling into the burlesque show it is today, poignantly documented in the noir classic Night and the City. As a college or Olympic sport, wrestling has suffered blows from Title IX and rule changes which make it more boring and injury-prone.

The most recent insult: The executive board of the Olympic Committee has removed wrestling from the Games. The core sports remaining include such apogees of athletic achievement as canoeing, handball, ping-pong, badminton, sailing, golf, rhythmic gymnastics, synchronized swimming, and volleyball. Barring a reinstatement, wrestling will be replaced with softball, climbing, karate, roller skating, squash, water skiing, and possibly even a form of Chinese acrobatics called wushu.

“Wrestling is not some silly game you play at the beach or at family gatherings; it is primordial combat.”

The basis for the Olympic Committee decision is elusive. The committee has mumbled vague things about low television popularity and ticket sales, but the facts indicate otherwise. Wags have noticed that Olympic Committee Executive Board responsible for the decision is mostly drawn from nations that do not excel at wrestling. This claim appears specious, as the nations represented on the committee won more medals in wrestling (two for Sweden, one for Ukraine) than pentathalon (one for Britain) or water polo (one for Spain, one for Australia). The nations of the executive committee did do well in ping-pong (10 medals total), so perhaps they had different priorities.

The IOC has been trying to get rid of the Greco-Roman version of wrestling since 2002. There is no female division in Greco-Roman wrestling. The IOC is concerned enough with gender equity to mention it twice in their list of official criteria for evaluation of sports for inclusion. Even boxing has a female division these days, and there will doubtless eventually be male Olympic rhythmic gymnastics and synchronized swimming events. Others have speculated that wrestling had problems with doping scandals, though wrestling compares favorably in this regard with ping-pong or equestrian sports; only one wrestler tested positive in last year’s Olympic Games. A Russian wrestling coach has posited a “gay conspiracy” against the sport, but considering the tastes of most gay men, this seems unlikely.

It is not necessary to speculate about the Olympic Committee’s motives. The shibboleths of the age explain well enough. “Sports” such as skateboarding, BMX bicycling, water skiing, and roller skating have grown Olympic pretensions because they’re popular. Such sports are popular because they are infantile and require no special human qualities. They require skill, but only the type of skill developed while wearing a retard helmet. No special athletic quality is required for skateboarding. No special strength of character is required for water skiing or waving pretty ribbons around in rhythmic gymnastic competitions.