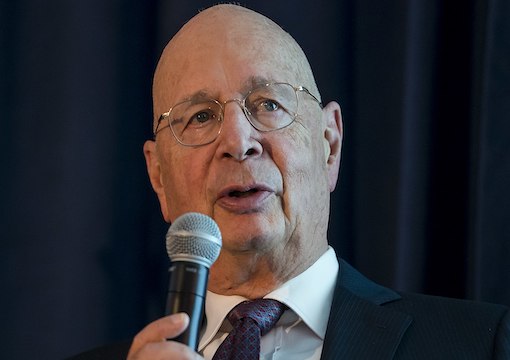 NEW YORK—Alexandra rang me from London to inquire about a man by the name of Klaus Schwab: “He sounds like the greatest threat of our time, should I be worried?” Nah, I answered, he’s just another smooth-talking wallet lifter, a typical smarmy Davos man. “That’s what scares me,” said the wife.

For the very few of you who have not heard of Klausie baby, he is the chairman of the World Economic Forum, or WEF, a grandiose title and well deserved to be sure, although it once published a think piece with its since-deleted slogan that said “You will own nothing, and you’ll be happy.” The WEF is where technocratic dreams make contact with business and political biggies high up in the Swiss Alps. Personally, I think it’s a networking scam, and the media has for a long time shielded the public from its goals. Except when Forbes magazine published a WEF think piece back in 2016 that urged people to “own nothing, have no privacy, and life will never be better.”

“I’m not so worried, but then I’m only a father and grandfather, whereas mothers tend to fret more than us macho tough guys.”

Hence Alexandra’s worries about the kids and grandkids having nothing after reading about a future that is “a fusion of physical, digital and biological identities,” gobbledygook so typical of Davos and WEF slogans. I’m not so worried, but then I’m only a father and grandfather, whereas mothers tend to fret more than us macho tough guys. What does worry me is globalization, a sleight of hand by haves to have more, while small-town rubes get less. J.D. Vance, best-selling author of Hillbilly Elegy, has just won the Republican nomination for the Senate in Ohio, where millions upon millions of cars were built from the 1960s to 2000, until NAFTA kicked in and 200,000 jobs went to Mexico and other such places. Trump was railing against such big corporation shenanigans even when he was a private citizen, and Trump voters have carried and will carry Ohio in future. What’s so strange about that? After three generations of molding steel, a family’s breadwinner loses his job but is expected to vote for some obedient woke deviant whom the New Dentist (Yorker) and the Bagel Times are behind? Poor white Americans may be scum to the media elite and Silicon Valley, but they’re still allowed to vote, and vote they will.

And what left-behind Middle America will vote against are elites and the ruling class who have plundered the country. Multibillionaire investor Peter Thiel, who has backed the Donald in the past, is no fool, nor a Trump tool, and will most likely come out for Trump again. Many of us are embarrassed by what Trump says and does, but we also recognize how far left the pendulum has swung under a media that sees middle- and working-class whites as the enemy. Trump’s strength is The Forgotten Man. Let’s call him The Common Man. And by “him” I don’t mean that common little man Sulzberger, who looks like a rodent and owns and publishes the Bagel Times; I mean the law-abiding, proud-of-their-country’s-past, salt-of-the-earth American.

The Forgotten Man respects institutions like the Supreme Court, now under assault by the lefty media calling for change because the court is “too political.” The Senate filibuster and the Electoral College are also under attack by the usual suspects, institutions that have served Uncle Sam well for centuries. All this from those who call the Jan. 6 riot in Washington an insurrection, and dismiss the deaths, fires, and attacks on public buildings by anarchists following the death of George Floyd. But let’s get back to Klaus’ worldview and my wife’s anxieties over the future of our children.

A clown by the name of Parag Khanna is the quintessential Davos Man. Klaus and he must think alike because they speak with the same forked tongue. Parag wants to see young people in the global south move en masse to the decrepit north. It’s called the “Great Reset.” Totally out of touch with normal human emotions, the bozo claims that the north has 300 million aging people and a decaying infrastructure, while 2 billion young people are sitting idly in the Middle East and South America. Let them all in, says the comedian. I say kill the messenger. While Davos creeps discuss a sustainable future using phrases such as “physical, digital and biological identity,” I envision Stalin’s forced labor transfers that produced nothing but human misery. As if we didn’t have enough troubles in this world.

Which bring me to what Alexandra should really be worrying about, not publicity-seeking con men like Klaus and Parag, but war-crazy neocons and arms-industry lobbyists trying to get Uncle Sam even more involved in a possible nuclear exchange with Putin. These money-crazed zealots are reckless and totally unaware of history, especially how World War I began. Bragging to the news media about how American know-how guided Ukrainians to kill Russian generals and sink Russian ships is as dumb as it gets. An unintended war with Russia would mean the end of the world. Zelensky should be told to shut up and enjoy the billion he’s put aside from the Chinese construction of his country before it was deconstructed by Russia. Ukraine is not an American protectorate, and not even close to the American continent or interests. If Boris wants to get involved, let him go and volunteer for a mine-clearing detail. In the meantime I want to enjoy my grandchildren in peace.