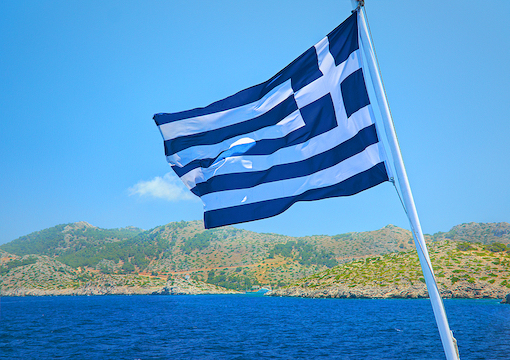 “Invert your ensign and pretend to be Serbs.”

Such is the advice currently offered by Greek port officials to Russian yachts en route to Turkey.

The Aegean now plays host to an Olympian game of musical chairs. No one wants the music to stop while a “problem boat” is hovering in their harbor. I know, because I’m aboard one right now.

“This is what happens when island policy is settled by avaricious political science graduates who don’t understand the difference between an asset and a liability.”

Having depleted the Mediterranean’s superyacht stocks, the E.U. has broadened its nets to the small fry. Since April 16, anything afloat with an enemy flag is considered a legal catch.

As a Brit, my ordeal is similar to that of the Russians. Both I and my yacht have outstayed our European welcome and number among the eastward refugees. Snigger if you must in the cheap seats (I voted for independence), but, faced with the option of impounding a vessel or turning a blind eye, Greek bureaucracy draws from its vast accumulation of goodwill, speed, and efficiency.

This is what happens when island policy is settled by avaricious political science graduates who don’t understand the difference between an asset and a liability.

Yachts are seldom worth more than their scrap value and, after ten minutes of neglect, usually much less. This coefficient applies to towering leviathans of teak and glass just as it does to my 1980s racing sloop with its moth-eaten sails. No one can afford to impound a vessel that is worth less than a season’s mooring fees.

Consider the 86m Amore Vero, looted in Antibes a couple of months ago. How would that look in the Aegean—blocking the morning sunlight to the waterfront cafés and leaking oil into the sapphire water because its owner can’t shift enough Bitcoin to pay the maintenance crew? Once a machine that size can’t start its engines, it is the island, not the ship, that should consider itself hostage.

Amore Vero’s speculated owner sits on the board of Rosneft, as does former German chancellor Gerhard Schroeder, but the Russian yachts I was rafted up with in a tiny island harbor last week were more the types that might be owned by dentists in Baltimore. Pouncing on us would cost authorities no more than fifty euros and a dozen wealthy tourists per day. In the words of the cheerful Crimean skipper who shared round his last bottle of Stolichnaya, the nautical term “wing it” now applies more often to the transit log than to the point of sail.

Next morning, we stood before judgment in the port police office. Booted and holstered, an elderly madame marshal entered the room, cheroot hanging from a ranine lip.

“What have we got today? Don’t tell me: Three Serbs, a Holy Fool from England, and you’ve all lost your passports.” We grunted our chastened affirmation.

She turned to me first.

“To take back Constantinople, ma’am.” She softened a little.

“Right—well, we won’t put that on the form, darling, or you’ll have to pay a fine. Just get out of here before the charter boats arrive.”

Russian nationality, rather than affiliation with Putin, seems a sufficient test of guilt in the far-off mind of the European Union. It doesn’t quite wash, however, on islands and headlands reclaimed from Ottoman rule with Russian and British naval agitation.

History is fixed in the memory of the polished wharves as they bustle with the first arrivals from the mainland. Donkeys are bundled with Louis Vuitton suitcases. Waiters weave like large silken fish around tables of linen and avocado toast where Atlantic voices croak on cherry e-tobacco about Nazis Trump and Putin. The fishermen run their lucrative sidelines in sightseeing trips and, underneath, there lurks the mosaic of a very real civilization; a great maritime tradition that still grants chowder and charity to seafarers on a mission.

So, with grim nods of “Good luck,” and “See you when it’s over,” the allies slip their lines and head east.