Yanking the Lever in Sin City 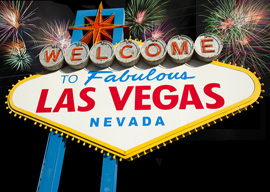 Las Vegas is the the most inorganic of all American cities. Surrounded by a dry, dusty, prehistoric landscape, this town was conjured from nothingness by the Mob not very long ago.

Vegas hosts such sleazy, high-rolling political campaign contributors as Sheldon Adelson and Steve Wynn. Nevada is the home state to the cadaverous Democratic Senate Majority Leader Harry Reid, who is a Mormon like Mitt Romney, although the press doesn”t seem to enjoy reminding you about it.

Although Nevada offers a measly half-dozen electoral votes, as of Monday it was also one of the dwindling “battleground states,” so I decided to spend Election Night 2012 in this city of a trillion germs that lurk beneath a billion neon lights.

I arrive late Monday night, have a sumptuously oily and garlicky dinner at Battista’s Hole in the Wall (the cozy little Italian restaurant featured in the film Casino), then check into a casino hotel to catch up on some sleep. Before heading to my room I buy some local papers in the hotel lobby. The Las Vegas Sun is endorsing Obama, while the Review-Journal is pulling for Romney. The Review-Journal features a Larry Elder article called “What do I tell my black child if Obama Loses?” Well, duh! The obvious answer is, “Obama lost.” No need to make it racial, dude.

“If you have any basic understanding of math, you”d realize that everyone except the casino owners lose in the end.”

I awake early on Election Day and take in some of the local and cable news about the election. Fox News says it’s a tossup”the closest presidential race in 80 years.

One of Fox’s seemingly thousands of blonde lipstick pundits excitedly chirps that “Democracy is happening now,” as if choosing between two puppets had anything to do with democracy. As far as I can tell, this election is a choice between a man who promised change four years ago versus one who’s promising change now. Basically, voters are being asked to decide which candidate is less completely full of shit than the other.

I watch a clip of Obama campaigning in the eternally ugly state of Ohio, promising (threatening?) to finish what he started. I wind up deciding that Bruce Springsteen really needs to quit trying to stop channeling the ghost of Woody Guthrie, enjoy his millions, and quit pretending he has any vestigial memory of what it’s like to be working-class in America these days.

A fossilized former NY Senator Al D”Amato is predicting a Romney victory. The oddly mustachioed David Axelrod says Obama has it zipped up. There are early reports of voting machines switching Romney votes to Obama votes and vice-versa. There are also murmurs of a Black Panther stalking a precinct in Philadelphia again. Jesse Jackson offered some opinions about the Philly situation, but I couldn”t understand what he was saying because Jesse Jackson talks funny.

Around 3PM a maid comes in to clean my hotel room. I think of asking her about the election, but I don”t speak Spanish.

As the sun sets, I drive toward Sunrise Mountain in North Las Vegas to get some takeout soul food for dinner and ask the locals about their opinions on the election. But since the restaurant had a picture of Obama in its window and a stack of free newspapers with an article called “The Power of the Black Vote,” I buy my crawfish, red beans, and brown rice before making a meek and silent exit.