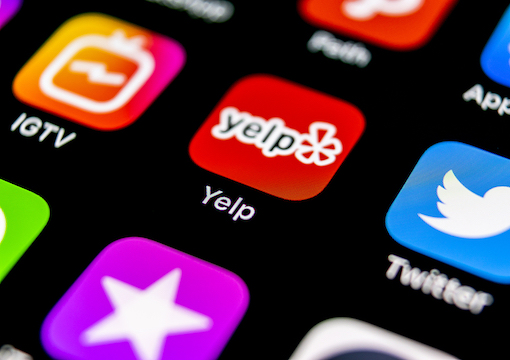 Yelp, a company that offers users a platform to review businesses online, announced last Thursday that it is debuting a new policy that allows customers to report and flag businesses that they believe are racist:

At Yelp, we value diversity, inclusion and belonging, both internally and on our platform, which means we have a zero tolerance policy to racism. We know these values are important to our users and now more than ever, consumers are increasingly conscious of the types of businesses they patronize and support. In fact, we’ve seen that reviews mentioning Black-owned businesses were up more than 617% this summer compared to last summer….

Communities have always turned to Yelp in reaction to current events at the local level. As the nation reckons with issues of systemic racism, we’ve seen in the last few months that there is a clear need to warn consumers about businesses associated with egregious, racially-charged actions to help people make more informed spending decisions…. Now, when a business gains public attention for reports of racist conduct, such as using racist language or symbols, Yelp will place a new Business Accused of Racist Behavior Alert on their Yelp page to inform users, along with a link to a news article where they can learn more about the incident.

What could possibly go wrong with this? To start with, Yelp has said nothing about how it intends to distinguish false reports of racism from the real thing. It explains that

We advocate for personal expression and provide a platform that encourages people to share their experience online, but at the same time it’s always been Yelp’s policy that all reviews must be based on actual first-hand consumer experiences with the business. This policy is critical to mitigating fake reviews and maintaining the integrity of content on our platform.

It’s as if “actual first-hand consumer experiences,” such as the belief that you are a victim of racism, are not prone to erroneous interpretations.

“Our culture is rife with persons who have been taught by ‘higher education’ and the media that they are victims.”

Unsurprisingly, Black Lives Matter is involved with the new policy:

The new Business Accused of Racist Behavior Alert is an extension of our Public Attention Alert that we introduced in response to a rise in social activism surrounding the Black Lives Matter movement…. So far in 2020, we’ve seen a 133% increase in the number of media-fueled incidences on Yelp compared to the same time last year. Between May 26 and September 30, we placed more than 450 alerts on business pages that were either accused of, or the target of, racist behavior related to the Black Lives Matter movement.

More than 450 alerts! More than a few, I would venture, are like the Starbucks incident of April 2018, in which two young black men cried “racism” after the manager of the coffee shop called the police on them since they insisted on remaining in the store without purchasing anything. Matt Walsh, summing up their own account, given on Good Morning America, wrote:

They walked into the store, grabbed a table, and then asked to use the restroom. The manager told them that they had to buy something to use it. They declined, and went back to sit at the table without having purchased anything. Now that they had called attention to themselves, the manager was aware of their presence and aware that they were not paying customers. She approached them and offered to get them drinks or anything else they might want. They declined. They were asked to leave and they declined. The police came and asked them to leave and they declined. This is their own version.

Our culture is rife with persons who have been taught by “higher education” and the media that they are victims. So that there is no lack of people who are given to take any negative experience, be it a rude or negligent waiter, as a sign of “racism.” And since Yelp’s only criteria for establishing racism is “actual first-hand consumer experiences,” that is to say, one’s subjective interpretation of phenomena, the new policy is sure to be abused.

No matter for Yelp. The company makes it clear that its interest is not fairness, but advancing a woke agenda throughout the workplace:

Many local businesses want to create a more inclusive environment for employees and customers alike, but they often don’t have the resources that larger companies do to access training materials, educate employees, and develop language to share with their customers and employees. That’s why Yelp and Open to All® have partnered to bring local businesses a new toolkit that allows them to take the next step in creating an inclusive community. The toolkit includes a 60-minute unlearning bias training video for employees, outreach language for customers and employees, social media assets, and more. With more than half a million businesses indicating themselves as Open to All on their Yelp business page, Open to All has created resources for small and medium-sized businesses to uplevel their diversity and inclusion practices.

I suspect, however, that cant about greater “diversity and inclusion” will provide no comfort for any business owner whose company has suffered due to false accusations of racism on Yelp.

Meanwhile, the left, thanks to Yelp, has another tool for smearing people and ruining their lives.