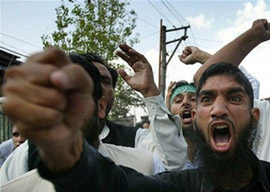 Do you know anything about Yemen? No, me neither. Hang on, let me do a little checking at the CIA World Factbook.

Here we go. Size: a tad bigger than Spain. Mostly desert, only 2.9 percent arable land. Population: 24 million plus, squinched in between Taiwan and North Korea in the world rankings. Total fertility rate: 4.63, ranked 30th out of 223 nations, up there with Togo, Nigeria, and Gabon. Life expectancy at birth: 63.7, against an overall world average of 67.2. Median age 18 years. (The USA’s is 37.) GDP per capita: $2,600, ranked 172, better than Moldova and Laos but below Djibouti and Nicaragua. OK, getting a rough picture here.

I remember a factlet about Yemen that shows up in every second general-readership article on demography: In 1950 there were 24 Russians for every Yemeni (103m versus 4.3m); shortly after 2050, Yemen will have more people than Russia. The calculation was done by demographer Paul Demeny in 2003. It’s here, complete with some striking diagrams.

“Why does their desire to live in the USA outweigh our desire for a tad less danger and trauma in our lives?”

Culture-wise, Yemen is Arab and Muslim, with the corresponding gangster-kleptocracy type of government and a fair complement of glittery-eyed fundamentalist Islamic nutjobs. Vanhanen gives its mean national IQ as 85, a full standard deviation below the white-European mean: although since, as everyone knows, IQ is a completely meaningless measure of nothing whatsoever, we should ignore that.

[Though off at a tangent from the main topic here, I got the following curious email from a long-time reader the other day:

I just marveled at those numbers, being a numbers guy. They are very nearly perfectly negatively correlated to mean group IQ. In fact, I wrote a simple linear equation that relates the two. It’s spooky.

These are almost exactly the consensus averages for group mean IQs. Stunning. Feel free to claim it as your own.

Why on Earth would I want to claim such a preposterous “result” as my own? Not only is IQ utterly meaningless, but there is no such thing as race. Everyone knows that. I have passed the name of my e-correspondent to the FBI. Eric Holder’s people will soon have him safely in custody, never fear!]