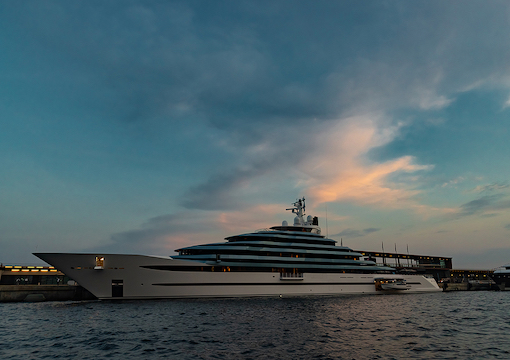 The only good news after the massacres in Ukraine is that so many ugly behemoth superyachts have been seized and will not be polluting the seas this summer. There is no more horrible sight than an oligarch’s superyacht on the horizon, and that is before it disgorges its passengers, which is a horror show in itself. Arab boats are even worse, as are the hookers on board. The other good news is that Elon Musk has become the largest stakeholder of Twitter, and in a Trojan War replication has challenged Putin to a duel. Oh, what a wonderful world this would be if those who started wars would duke it out with their opponents rather than sending lots of youngsters to do the fighting for them. But don’t hold your breath, the last time it was done Achilles challenged and killed Hector, then dragged him from his chariot three times around the walls of Troy.

Agamemnon has been on my mind lately, after having read what a man named Paul Krugman wrote in the Bagel Times. Paul, not Agamemnon, wrote that Putin has surrounded himself with people who tell him what he wants to hear. Really? This is an exclusive worthy of Walter Duranty’s one in the NY Times that informed us that there was no man-made famine in Ukraine back in the 1930s. (Only a few million died.) Strongmen have been surrounding themselves with yes-men since, well, Agamemnon’s time, and that is why the Greek leader has been on my mind. He brought back Cassandra with him after the Sack of Troy and didn’t bother to even ask her a question or two. For any of you who have not been reading professor Peter Jones, Cassandra was King Priam’s prettiest daughter—in fact, some said she was more beautiful than the abducted and seduced (but not abandoned) Greek who caused the ten-year war to begin with, and she possessed prophetic gifts.

“Being an ancient Greek, I have always consulted with Cassandra, and this is why I’ve survived all these years.”

Agamemnon should have debriefed his captive before returning, but if the Trojans hadn’t listened to Cassandra’s warning about the Wooden Horse, why would the victor of the war have done so? Boy, could the young and beautiful Trojan have told the Greek leader a thing or two about his future. Let’s face it: Unlike with our Boris, who yet again lucked out when Putingate turned Partygate into Nothingate, Agamemnon’s homecoming party was a total bust. His wife Clytemnestra’s lover Aegisthus murdered him, Aegisthus was in turn killed by Agamemnon’s son Orestes, and although my direct ancestor Homer does not say if Orestes then murdered his mother, he implies it. See what I mean when I say Agamemnon should have posed a few questions to Cassandra?

But I’m getting carried away here. All this started with that fool Paul Krugman announcing the obvious. All strongmen listen to yes-men and jail those who disagree with them. But why am I surprised? Paul the fool has in the past predicted that the stock market would hit zero because of Trump’s election, and the thing went through the roof. He has yet to comment on the duel between Vlad and Elon, thank God. Who will emerge victorious if it takes place? It’s gonna be Vlad because of judo and wrestling with tigers and all that, whereas Elon just wrestles with girls like Amber Heard. (Elon, you should call me—I know some dirty tricks that you don’t. But I won’t be hanging around my phone waiting as you’ve already gone Hollywood on me.)

If Putin had a Cassandra around before he invaded, would he have listened to her? Strongmen don’t usually change their minds because they believe in their own propaganda. In Putin’s case, it was a belief in his army’s prowess and the eagerness of Ukrainians to submit to Russian rule. In the good old US of A, foreign policy aides to Biden spent their Trump years consulting firms funded by Defense Department contractors. This is in itself unethical because it puts them in the pocket of the military-industrial complex, a monster that can only be fed by war. These are the people who laud America’s wars in Afghanistan, Iraq, and Libya, and are the ones now itching to get into a fight with Vlad. They are also advising Zelensky on how to browbeat the West into getting involved.

Being an ancient Greek, I have always consulted with Cassandra, and this is why I’ve survived all these years. If anyone bothered to ask me about Ukraine before the fighting started, I’d have advised Zelensky to cool it as far as NATO is concerned. NATO is a red flag to the Russkies, and rightly so. Then I would have told Putin to take up Elon Musk’s challenge and name the date and neutral place, but stay away from Ukraine, or at least just grab Donbas and call it a day.

But does anyone ask for advice from Taki nowadays? I’d be lucky if the Russians ask me because they believe in history. The Americans will not because they are trying to erase their story, one that saw Ben Franklin perform a miracle in Paris and get the Frogs involved in America’s war of independence from you-know-who. Without the French support in money and ships, great Americans like Washington, Jefferson, and of course Franklin, men born Englishmen, would not have died as Americans, but as Englishmen. You figure it out.