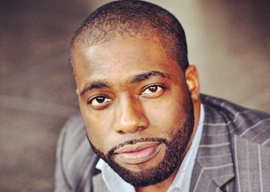 If I were Brian Banks, I’d be obsessed with trying to figure out when and how I pissed off a gypsy. Because seriously, what else but a gypsy curse can explain this guy’s life?

Brian Banks was a young man with a bright future. A skilled football player, he was in great demand by pro teams…until a high school classmate accused him of rape. Yes, a noble black woman (aren’t they all?) accused a thuggish black man (ditto) of raping her in the halls of their high school, and the prosecutors, their fortitude embiggened by the glowing rays of nobleness emanating from the brave, courageous victim, put Banks away for five years, based solely on the word of the saintly female, whose heroism was of such magnitude that next to her, Harriet Tubman looks like the “where’s the beef” lady.

Lady Noble Noir also sued the school district where the rape took place, for not providing a safe campus for purehearted women of color. She won $1.5 million.

After serving his time, Banks was contacted by his accuser, who wanted to resume their friendship (the friendship that was interrupted by her rape accusation). He, and his legal team, recorded her admitting that she’d made up the entire rape story. Banks was fully exonerated, and the school district successfully sued Noble Negress for the return of the money from the civil suit (sadly, that money was long gone, having been spent on hair extensions and Tyler Perry DVDs).

His name cleared, his tormentor punished, surely Brian Banks assumed that his bad luck had ended.

In 2017, Hollywood came a-callin’. Some hotshot producers wanted to make a feature film of Banks’ ordeal. The director of the project was Tom Shadyac, the A-lister behind such hits as Evan Almighty, Bruce Almighty, Patch Adams, Liar Liar, and The Nutty Professor. Banks himself was tapped to executive-produce.

Now, finally, Brian Banks would have his say. Now the world would hear his story. Now he would not be silenced by a woman making dubious rape claims.

If you haven’t heard of the Brian Banks film, there’s a reason. No one in the media is talking about it. Remember all the hype surrounding Spike Lee’s BlacKkKlansman and Jordan Peele’s Get Out? Those movies were played up ceaselessly in the press because, we were told, they’re movies “America needs to see right now.” But in the case of the Banks film, while a dingbat like me can try to make the silly ol’ argument that Banks’ story is way more relevant than a horror movie about whites transferring their consciousness into lobotomized black zombies, the powers-that-be know better: The Banks film is exactly what America doesn’t need to see at the moment.

To be fair, the film might have been a hard sell at any time in the post-#MeToo universe. But to release it during the friggin’ Kavanaugh confirmation hearings was a stake through its celluloid heart. Brian Banks’ film is as doomed as his football career, and as lost as his youth.

“Brian Banks’ film is as doomed as his football career, and as lost as his youth.”

The left cannot allow you to know the Brian Banks story, because at the moment, leftists are attempting to push yet another of their reality-bending myths, which is that “women don’t lie” about sexual assault. Women must be taken at their word; lying isn’t a possibility. It’s not just that women don’t lie, it’s that women can’t lie. A leftist will shriek, “Why would a woman lie about rape?” Well, ask that question to Banks’ accuser, Wanetta Gibson. “What could any woman stand to gain from lying about rape?” Well, in Wanetta Gibson’s case, $1.5 mil.

The critical reaction to the Banks film has been hilarious. Forced to review the movie after it won the audience award (oh shit, people actually like the film? Suppression shield activate!) for best feature at the Los Angeles Film Festival, Variety’s Peter Debruge devoted his entire column to trying to explain how a movie that is relevant to current events is totally not relevant to current events.

“The timing could hardly be worse for ‘Brian Banks,’” Debruge declared. “In a sign that this solid social-justice drama stands apart from current events—an exceptional case that neither contradicts nor enhances the #MeToo movement—‘Brian Banks’ was met with multiple standing ovations at its L.A. Film Festival premiere.” Let’s take a moment to dissect that ungodly bullshit statement. The fact that the film was met with standing ovations and audience awards is a sign that it “stands apart from current events”? Why is it not a sign that it heavily relates to them? In Debruge’s world, in which everyone and their pampered terrier is a registered Democrat and social-justice loon, it’s inconceivable that an audience might view this film as relevant to current events, because current events are telling us that women don’t lie. Hence, the standing ovations must therefore be proof that the audience viewed it as standing apart from today’s news. Debruge’s proof of this is nothing more than his personal bias, much as Christine Ford’s proof of her assault allegation was nothing more than a 30-year-old “recovered” memory.

While reassuring his readers that it’s okay to like the Banks film because the real villains are the white prosecutors who were racist for seeking to convict an innocent black man (this bulb is so dim, he literally can’t comprehend that they only prosecuted because they believed the woman, which is exactly what we’re all currently being ordered to do), Debruge concludes, “Is this the movie the world needs now, one that casts doubt on survivor testimony and feeds a misogynistic culture’s fear that ‘good’ men can have their lives destroyed by such accusations (while failing to acknowledge how sexual assault can do the same to its targets)?”

Dear Gypsy Who Cursed Brian Banks: Please curse this guy instead. Seriously. This guy deserves it; Banks didn’t. So please, at least give Peter Debruge some warts or lesions or something.

Debruge condemns the film for failing to acknowledge that sexual assault can harm women in a movie about a woman who was not a victim of sexual assault. The film tells a true, uncontested story in which the man was the victim. So yes, good men can have their lives destroyed by false rape accusations. Debruge calls the “fear that ‘good’ men can have their lives destroyed by such accusations” a product of “misogyny.” No, cretin. That fear is a product of reality. Because it happened. And you admit it happened. And by the way, a-hole, putting scare quotes around “good” when referring to Brian Banks is—how do the kids say it these days?—“racist AF.”

Leftism is, and has always been, about trying to persuade the general public to accept as truth things that are objectively false, from Marxist economics (“It works even though it never has”) to the New Soviet Man (“We can breed selfishness out of the human character”) to Lysenkoism (“Genes are a myth!”). In current times, we should have shut that shit down the minute leftists told us that asthma inhalers were a greater threat to the polar icecaps than the private jets of millionaires (let’s not forget that the CFC inhaler ban was passed under George W. Bush…another example of Republicans going along with leftist insanity so as not to be slammed as Hitlers by the people who slam us as Hitlers anyway). And now, it’s become a litmus test that to not be condemned as a Hitler, one must accept that a man who thinks he’s a woman “on the inside” is actually a full-fledged biological woman. That’s what the left does. Like cult leaders, leftists are not content to believe their own nonsense. They must force you to believe it, too.

That’s why the Brian Banks story is so important. It’s a tool for cult deprogramming. And that’s why the Jim Joneses on the left cannot allow it to be seen. The history of the left has been one of testing what they can get away with, how far we’ll allow ourselves to be bullied into seeing up as down and night as day. We laid down for the asthma-inhaler ban, and let’s not underplay the importance of that, because it showed that we were willing to acquiesce to leftist myths even at the risk of human lives (the lives of asthmatics). And now we’re being browbeaten into agreeing that a man in a dress is a woman who should be allowed to use female-only bathrooms and locker rooms. We stand by impotently as scholarly papers challenging tranny orthodoxy are censored and scientists and academics silenced. Because if we speak what we know to be true, we will also be silenced. So we let it happen. We let the cult leaders dictate the terms of reality.

Which brings us to the newest tribute the left is demanding we pay to unreason: “Women don’t lie.” Deep down, we all know that isn’t true. So this new orthodoxy must be enforced by intimidation (like accosting people in elevators) and suppression of all information that proves the myth wrong (like the Banks film).

As Soviet serial killer Andrei Chikatilo was wantonly murdering women and boys in the 1980s, the commissars bullied the police and the press into accepting the lie that serial killers were purely a Western phenomenon. Communists could not be serial killers, hence there were no murders (even though there were). That was the surrender to unreality their cult demanded, and people lost their lives as a result.

Today’s American leftists demand allegiance to an even greater myth: Women don’t lie. And we surrender to that myth at our own risk.