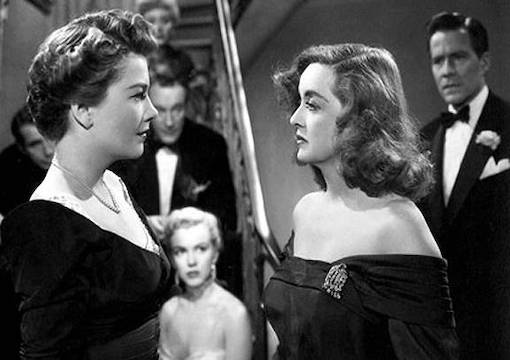 photo credit: All About Eve

GSTAAD—Good manners aside, what I miss nowadays is a new, intelligent, fine-acted movie. Never have I seen so much garbage as there is on TV today: sci-fi crap, superhero rubbish, dystopian garbage, and junk stories about ugly, solipsistic youths revolting against overbearing parents. Director Jimmy Toback blames the subject matter for the lousy content, one that needs to boost racial and gender diversity. I think lack of talent is the culprit. Using the f-word nonstop is a given in any Hollywood production, with constant violence added on for a perfectly lousy and unwatchable film. When one thinks back to such great movies as The Best Years of Our Lives, Casablanca, The Maltese Falcon, All About Eve, Great Expectations, The Third Man, Rebecca, and the films of Raymond Chandler’s books, there is hardly any violence and absolutely no swear words. There is great tension, terrific repartee in the dialogue, and wonderful acting. Today’s screen characters are less believable than Tom and Jerry, and are identified by the formulaic, fatuous language of PC: Everything is evidence of racism and white supremacy and antiblackness.

Novels, needless to say, are not getting any better either, but then I stopped reading fiction after Hemingway, Fitzgerald, Maugham, Greene, Waugh, Mailer, Shaw, and Jones, and now only stick to history. Long ago Aristotle wrote that the ability to delight in fine characters and noble actions is the most important of habits. Fitzgerald & Co.’s characters hardly live up to Aristotle’s standards, but the writing is so good one forgets their lack of noble actions. The same applies to Papa’s heroes, all of them flawed, all of them a delight to read about. The great exception is Larry Darrell, Maugham’s protagonist in The Razor’s Edge. Larry is just about perfect. As one who gives in easily to temptation, I can now blame my weaknesses on the inadequate ideals set by my literary heroes. Most of them are incurable romantics, lechers, and hopeless drunks. Finally I have an excuse.

“Christianity not only created equality among men, it also shaped the West.”

Incidentally, the prologue of Julia Carter’s recently published Sunlight and Shadows (about writers in the Riviera) is among the finest I’ve read about that once fabulous piece of real estate. The piece on Maugham is perfect. The great man struggled mostly with his sexuality, not with the existence of the Almighty. Many writers deny God, even devout Catholics like Waugh and Greene. Well, they don’t exactly deny him, but they show public piety corrupting private faith. What I discover as I grow older is that some very, very smart people believe in God. Even Charles Darwin believed in God. Many scientists—physics is accommodating to God—great intellectuals, Albert Einstein, and poor little me are all in awe, especially as one nears the end. As they say, there are no atheists in foxholes. Unexpectedly, many modernist poets were believers, Auden and Eliot, Yeats and Wallace Stevens. Chesterton and Belloc were true believers and wonderful men, and I couldn’t give a flying you-know-what if they are at present out of favor. Those against God are the smelly, bearded types like Nietzsche (whom Richard Wagner said went nuts because of too much masturbation), Shaw, Freud, and Picasso, and freaks like Foucault, Lacan, and Lyotard. Dawkins and Hitchens made hay with their anti-God campaigns, contending that Western society would be better off if we could eradicate from it the last vestiges of Christianity. I say society would be better off if both men had been born donkeys, helping to carry overweight tourists up steep Santorini island steps.

What these otherwise smart but foolish and ignorant people seem to forget is that Christianity not only created equality among men, it also shaped the West. True Christians believe that God places infinite value on every human life. Christian salvation is an individual matter and has nothing to do with tribe, family, or wealth. The know-nothings who have tried to connect Christianity with slavery in that dump that America has turned into can’t even get their facts right. Slavery pre-dated Christianity by many centuries. The late Sir David Barclay and I talked a lot about Christianity and our Lord Jesus. Mind you, there are worse things than ignorance, although right now only Biden comes to mind. And speaking of calamities, three weeks ago, on Aug. 11, a terrible thing happened: I turned 85. I am not about to turn aging into a moral project, but what pisses me off is the big lie I was told sixty or even seventy years ago: that if I reached a ripe old age the rage to live would calm down and an inner peace would settle within me. It’s as big a lie as socialism, or the one that says we’re all created equal. (Hemingway is the same as the bearded maniac who blows up women and children?)

The urge to chase beautiful women never goes away, so keep that in mind, you young whippersnappers. What does suffer is the performance, but that’s not necessarily a bad thing. The words also tend to come slowly, but as far as throwing in the towel is concerned, the best sportswriter in America, Phil Mushnick, said he’d rather expire than retire, and that goes for me, too, but then it’s not up to me. In the meantime, daily training, hard-contact karate against younger opponents, and lots of drinking and smoking and partying will do. Why change a winning game?