You Believe What You Want to Believe 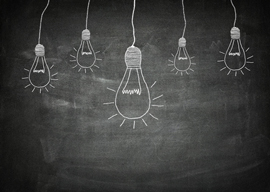 I was walking through the Fox News building a while ago and a producer introduced me to a young black man by saying, “This is the engineer you”ll be working with tonight.” We shook hands and the engineer said, “I know who you are. Look, I want you to know, I don”t agree with all your beliefs but I respect you for speaking your mind.” I said “Thanks” because we were in a hurry but what I really wanted to say was, “What beliefs? I”m not a Scientologist. I don”t really have “beliefs.” I have opinions based on the information provided. If you have data that contradicts that opinion, well, let’s get busy as a stump-tailed cow in fly time!”

I”d love to change my mind about something. That’s called learning. My views aren”t radical. They”re benign. I just want people to be happy and free and live full lives that are liberated from bullshit. It’s everyone else who’s radical. For example, I think …

Four men from North Carolina State University decided to take a break from oppressing women and invented a nail polish that can detect the rape drug Rohypnol. Unfortunately, feminists have decided this is stupid because we should focus on teaching men not to rape instead.

I went through this same logic on Hannity when I suggested you should worry more about your daughter attending Spring Break than your son. “They have different genitalia,” I was forced to explain.

Of course we should tell men rape is bad. We do. We throw them in jail. That doesn”t mean there won”t always be mentally deranged sociopaths buying rape drugs. The utopian feminist can talk about Eden all she wants. Here on earth, we”d like to prevent some rapes from happening.

No matter what the true story is with Michael Brown, it was an anomaly. Young, black murder victims are almost always shot by young, black criminals. If you want to help prevent this, read More Guns, Less Crime.

The gun control lobby seems to be predicated on the opposite belief. They spend billions promoting Hitler-esque laws that prevent pretty much anyone decent from being armed. Here in NYC, getting a handgun legally is virtually impossible but I know of at least two guys who will sell me one illegally for $500. You can”t get paintball guns here but we still have almost a murder a day because only bad guys have guns.

I think it would be cool to have a gun in the city, but you know who really needs one? The old lady in the ghetto walking home from work and the blue-collar father who can”t afford to leave a sketchy neighborhood. Gangsters will always be killing each other, but innocent people can only protect themselves sometimes.
Similarly, stop-and-frisk sounds like innocent black dudes getting harassed. It actually disproportionately stops whites but whatever. The big picture here is it makes poor black areas safer.

Once again, I like the sound of the gun control advocates” utopia, where nobody gets murdered and innocent people are never harassed, but it leads to more deaths than a pro-gun stance.

“Besides, who cares if your group didn”t win the test? My family tree looks like a dead witch’s hair dipped in a puddle of whiskey but I don”t care. They”re not me.”

THE POOR DESERVE AN EDUCATION

We tried giving teachers four months off a year and paying them almost $60 an hour to leave at 3:20 but it didn”t work. Test scores haven”t budged in half a century. I blame the teachers” ironclad contracts that the overfed unions created. We”re told it’s systemic and “not one change” is going to fix it, but charter schools did. They followed the market and made it possible to fire teachers and now the schools are thriving, especially for poor black kids. You can keep flogging the dead horse of public schools, but I think kids in Harlem deserve an education, don”t you?

THE POOR DESERVE JOBS, TOO

Tap water has been flammable since way before fracking existed, but this naturally occurring reaction has caused an overreaction that’s cost millions of jobs. Obama did the same thing when he stonewalled on the Keystone pipeline. Are all these moves being made so we can prolong this war in the Middle East? I thought war and unemployment were bad things.

Also, mass immigration isn”t about allowing Mexicans the same prosperity we derived from Ellis Island. It’s about making rich white guys in both countries wealthier. It devastates the Mexican towns these workers come from and it kills the American towns these workers go to. Liberals tell us we need to raise the minimum wage while encouraging a border policy that is pricing the American poor out of the market, especially working-class blacks in California. The more I learn about liberal policy, the more it sounds like a war on black America.

WE MUST PROTECT THE ENVIRONMENT

When you tell a farmer he can lose his land if a rare owl is spotted on it, you get solutions like “Shoot, Shovel, and Shut Up.” When you privatize game and make it profitable to preserve, you end up with situations like Zimbabwe where their entire wildlife went from skinny elephant carcasses to roaring lions going “Hell, yeah!”

The free market handles environmental protection on its own. Sure, China is making a mess of it right now, but so did we when we were at that stage. Then we fixed it. And it wasn”t the EPA’s annoying laws. Their budget has no effect on our air quality. If you really care about Mother Nature, you”ll make her profitable. As Greenpeace cofounder Dr. Patrick Moore says, “by buying wood you are … sending a signal into the market to plant more trees.”

When looking at a map of single-parent families and comparing it to murders, you can”t help but notice that more dads = less murder. The left’s view of feeding our nation’s poor with food stamps and helping out some impoverished, single mom who’s down on her luck sounds good. However, what accidentally happened is we”ve rewarded women for choosing single motherhood. Welfare culture has created a culture where dads are redundant and this has been especially hard on the black and Hispanic communities.

I got in trouble for saying food stamps get abused and our poor are now obese, but “freeloading doesn”t help the freeloaders,” as Stossel put it. Welfare has been bad for the poor since FDR rammed the “New Deal“ down their throats, and it has made the black dad obsolete. Once again, the liberal stance kills innocent people with kindness.

While trying to prove women are just as good as men, feminists actually fell into “women are men.” They”re just as strong and have all the same proclivities and want to be a mom just as much as men do. The result is a “roll call of regrets“ where women with expired ovaries have come to the realization that not selling out and never giving in has left them unable to enjoy motherhood, the best and most defining part of being a woman.

WOMEN SHOULDN”T BE EXTERMINATED, EITHER

Speaking of women being oppressed by feminists, how did the abortion debate become a feminist cause? About half the women in America are pro-life and they deserve to be heard. Also, as I”ve said many times before, abortion is leaning toward a gender-based decision, and that usually goes badly for the females. Call me sexist but I don”t like the idea of millions of women’s beliefs being ignored while we support a procedure that promotes female genocide.

As patriotism falls out of fashion, fascism has moved in to fill the void. The Boston Bombers were radicalized in the West. So was the kid who decapitated James Foley. In the name of tolerance we are allowing terrorist training camps on our own soil. I”m all for free speech but this is like having a Hitler Youth Camp on American soil in 1943. Radical Islam sees women as second-class citizens, hates gays, is totally opposed to democracy, and wants to kill us. Tolerating this isn”t multiculturalism. It’s treason.