You Couldn’t Handle a Revolution 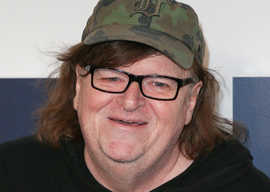 You say you want a revolution? That’s funny, because you seem like the type of person who cries over a broken fingernail.

Late-stage identity-based leftism is Revenge of the Nerds writ large, which seems amusing until you realize how much revenge the nerds really have in them. Every racial and sexual misfit and under-performer who was bullied in school—and possibly for reasons that had far more to do with their personality than their skin color or sexuality—is now given the whip hand and is more than willing to take out their pain on those they will never entirely forgive for mocking them during their formative years.

Mind you, this is the same left that cheered the lunch-counter protests of the 1960s but have morphed into shame-hungry lunatics who insist on the right to harass and eject from a restaurant anyone who doesn’t kowtow to their mush-brained fanaticism and nauseating piety.

On the southern American border for a couple months until the policy was stopped very recently, many parents from Mexico and points south were knowingly committing crimes by crossing into the USA with their children, fully aware that their kids could be ripped from their arms if they did so.

But we are expected to believe that Donald Trump, not the parents, are endangering children, even though most Americans aren’t buying it.

Incapable of the merest self-reflection, the modern left merely ramps up the false premises and baseless moral histrionics. They keep pounding this idea that there’s a deep, deep, dangerous crisis in America.

“Late-stage identity-based leftism is Revenge of the Nerds writ large, which seems amusing until you realize how much revenge the nerds really have in them.”

And they’re right, only not in the way they seem to think. Millions and millions of Americans are working themselves into a collective stroke panicking for no reason about Trump’s frankly middle-of-the-road policies that ain’t much different from those of Bill and Hillary Clinton in the 1990s. It’s these levels of needless dementia and raging paranoia over a nonexistent threat that are dangerous, especially when these perma-geeks have been working themselves into justifying all sorts of violence against their childhood enemies for years now. The fact that these turd nuggets are so far down the Delusion Hole that they’re willing to start bombing places because they lost an election is a sign we’re dealing with the mentally afflicted.

And now this squeaky rodent is saying that we should all be thankful that the worst thing happening to people who don’t gullibly swallow the implausible and pathetically simplistic progressive morality tale that has entirely hoodwinked he and his ilk is that they get chased out of restaurants by hysterical mobs. Yes, Li’l Hamster here is predicting far worse, and that it will all be justified.

Afflicted with Hyperbole Diarrhea like most of his cohorts these days, anyone who wishes that America would merely have the same immigration policies as the rest of the world is a “fascist” and a “white supremacist” and a “Nazi,” because Mr. Hamilton Nolan is a gladiator for justice who knows “what it feels like to have power wielded against you,” even though anyone who looks at this sheltered bon-bon for more than a second can tell he’s lying:

Do you think that being asked to leave a restaurant, or having your meal interrupted, or being called by the public is bad? My fascism-enabling friends, this is only the beginning….One thing that people who wield great power often fail to viscerally understand is what it feels like to have power wielded against you….This is all going to get more extreme. And it should. We are living in extreme times. The harm that is being done to all of us by the people in the American government is extreme….These people, who are pushing America merrily down the road to fascism and white nationalism, are delusional if they do not think that the backlash is going to get much worse.…When you aggressively fuck with people’s lives, you should not be surprised when they decide to fuck with yours.

This genetically recessive twat fails to realize this principle goes both ways. Little red chipmunk, you’d lose to a gerbil in a street war. You aren’t fooling anyone but your easily fooled friends.

Nolan’s tiny scrawny manlet public displays of social-justice PMS are balanced—in a purely fat-shaming way—by that of manatee filmmaker Michael Moore, who has yet to die of a heart attack or from choking to death on one of his chins. Moore is working on a film set to be released this September which makes the case that Donald Trump is an evil man, and only righteous millionaire fat white men who have a net worth of $50 million and live in nearly all-white enclaves are capable of generating sufficient empathy for the poor and downtrodden nonwhites who have to deal with those stupid evil wealthy white men all the time.

Moore, who has spent most of the past decade transitioning into a beanbag chair, recently appeared on The Late Show With Stephen Colbert, and it was immediately evident that both he and Colbert warmed up for the show by splitting a six-pack of liquid estrogen. They were unhappy and uncomfortable and unmanly and unfunny about Donald Trump and the fact that these are dangerous times and we need to maybe do something counter-dangerous in order to stop all that danger and all those Muslims being beheaded and all those cartel members being beheaded and even though if you want to get technical, those two groups are the ones doing most of the beheading these days, it’s the moral principle that counts.