You Don”t Mess With the Tsar 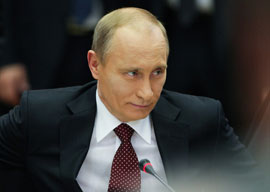 He makes running the world look easy. I’ve been watching Russian President Putin’s merciless wielding of the rule of law, Moscow-style. The president”might as well call him the Tsar, considering Mikhail Khodorkovsky’s description””Putinism is authoritarian state capitalism based around one leader””the Tsar, then, has reached an apex of power quite awe-inspiring. Given the length of his reign, the impunity of his regime vis-Ã -vis international law, and the iconic stability attained, I confess a mischievous admiration for this cold, cruel robot-man. He is a man of destiny, after all. Through outstanding propaganda and media control, he’s approaching epic status. I’m not a snob but I’m more interested in an epic sort of chap, for good or ill, than some well-meaning bumbler. There’s room for both, but which of the two would you rather be stuck with alone on Jack Sparrow’s island?

Recently, in short order, Putin has flexed his omnipotence several times upon the world stage, underlining the fact that nobody messes with Abaddon“Putin’s biker pseudonym, a Hebrew word which means “destruction.”

He stared down the president of the USA over Syria and so stole the crown of “most powerful man on the planet.” He just locked up thirty Greenpeace activists for playing childish jumping games on Gazprom’s private oil platforms. The eco-warriors’ ship was seized after gun-toting Russian forces abseiled from a helicopter…right onto the deck of the Arctic Sunrise. Message to Greenpeace: Your style is old. And that’s OK. Problem is, it’s weak and ineffective. I mean, this isn’t the 70s. Get some lasers or some shit.

“I confess a mischievous admiration for this cold, cruel robot-man.”

I grinned watching the military operation executed against Greenpeace. I enjoyed the astonishment on the activists’ faces when, not so much disarmed as not even carrying arms, Greenpeace’s “Arctic 30“ seemed to lose moral authority as fast as they lost their ship. Pictures of a pathetic English activist, elbows slouching on jail-cell bars, reveal they don’t have much backbone in the end. I mean, if you’re an eco-warrior, stand like a warrior. Don’t hug the bars like you’re waiting for mummy, whining moral platitudes at Russian guards who don’t speak English. Why should they? You (Greenpeace) are too lazy to learn Russian. If you want to effect change, why not learn the dialect first? Come on…man up, Greenpeace! Suck on the rough justice if you want to push your cause. Where’s the attitude now?

Greenpeace has been brash and impolite, if not culturally offensive, in its campaigns over the years. We in the West permit Greenpeace their transgressions because we’re furtive voyeurs of these merry pranksters who made a full-time job out of growing beards and goofing around in dirigibles. Read on, Greenpeace, and maybe take some notes from a real warrior such as Putin.

The goal of disrupting oil production, aside from endangering the safety of oil workers (and themselves), is just too dumb. Oil will always reach the buyer. Always. Why Greenpeace doesn’t protest near, say, the offices of the ultimate buyers, I don’t know”though it makes for a poorer media stunt. The politically correct among us like to watch 40-something hipsters confronting primitive “tribesmen””Eskimos, actually”so that we can gloat at our own development as we sit safely in our urbanized environments participating in the world via satellite TV.

Taking the Eskimos’ side, as opposed to that of Greenpeace, it brings pleasure to see Tsar Vladimir sporting his furry Russian hat in the Siberian regions, invoking the law of the wild as the ultimate rule of law. You saw the macho photo portraits of Tsar Vladimir firing crossbow darts into a grey whale or tranquilizing a polar bear in the name of science. We’ve seen his rare soft touch, stroking a tiger cub given him for his birthday in 2008. We saw him cruising the streets of Crimea in a Harley Davidson wide-boy”the ultimate power statement.

When it comes to reprimanding people, Putin never lets us down. He shows no mercy to anyone, whatever they have (or haven’t actually) done. It’s a kind of integrity. Whether it’s the imprisoned Pussy Rioters or the Arctic 30 (for whose release David Cameron beseeched Putin), the Russian president never wavers.

He has been ruthless in his treatment of Mikhail Khodorkovsky (MK), Russia’s most high-profile jailbird, a former oligarch convicted in 2005 on charges of embezzlement and tax fraud. MK’s subsequent open criticism of the Putin regime didn’t go well for him. Unlike the other oligarchs, he stayed in the country while fomenting political dissent from a private jet. The jet was boarded by armed forces and the smooth but ruthless CEO Khodorkovsky was seized. The richest man in Russia was sent to prison in eastern Siberia”the gulag, no less. Ahead of his release from a nine-year term, MK found himself back in court in 2008 on charges even more ludicrous by any standards. (He was accused of siphoning off oil from his own company.)

MK was convicted again, and by now he’s been living in a Kafkaesque nightmare for almost a decade. Why did Putin add more years to his sentence? Ultimately the motive must have been to break the political spirit of the only man who came close to representing an articulate threat to Putin’s hegemony. The first jail sentence was a statement of zero tolerance against fat cats playing politics, with Putin playing the man of the people.