Your Best Bet Is Volatility 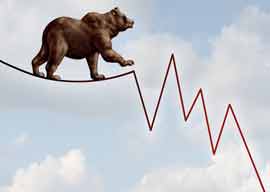 In a week of uniformly bad news for the capital markets, certain keywords repeated across the media. Signifiers like contagion, fear, or shock linger in the mind like echoes of a catastrophe. Only, the catastrophe is yet to come, aside from the Chinese economic slowdown, and the fall in oil, naturally. (A big “aside.”) Bloomberg warns that oil prices could be even worse than estimated, anticipating $20 levels or below, due to storage capacity already “breaching” its limit. Catastrophe or not, whatever’s going on has started with a jump. The continuing global sell-off of stocks puts us just one point away from 20%, the definition of a bear market, says Bloomberg. The Nikkei 225 Index is already inside bear territory after January’s 15% plummet. High anxiety describes current market sentiment. Good news is scarce… Prepare for a bumpy flight.

After the Bank of Japan moved into negative interest rate territory (NIRP), the question arose: Which country could be next? Surely not the U.S., nor the U.K.? Or not so surely? Bloomberg’s Feb. 8 headline suggested the Federal Reserve might adjust rates into the negative zone by 2017″according to commentary from Bank of America Merrill Lynch and JPMorgan Chase. The headline was ultimately sensationalizing, with a small chance of this actually occurring. Nonetheless, options on December 2017 Eurodollar future contracts imply a 13% chance of negative rates in the USA by the end of next year. Sweden, Denmark, and Switzerland have taken on NIRP without major disruption, fueling speculation that NIRP will spread to the U.K. and beyond.

The Financial Times canvassed the U.K.’s “City leaders,” who warned of a weak or even “doomed” global outlook. The CEO of Legal & General Nigel Wilson’s comment was harsh: “We are heading for a world of zeros: including zero inflation, zero growth in per-capita GDP, and zero growth in productivity.” Most other City grandees acknowledged a dangerous situation in softer language. The article’s final words ran: “…the message has to be “keep calm and carry on.”” Attributed to Simon Walker of the Institute of Directors, this clichÃ©d motto carried a note of denial, along with its clause: “the message has to be.” Why does the message “have to be”? Because the answer leads to contagion, i.e., “Keep calm”or everybody will panic.

The pseudonymous Tyler (Fight Club) Durden, contributor in chief and editor of Zero Hedge, warns of the new analysis showing “global equity market investors have lost a stunning $16.5 trillion of their newfound [Central Bank]-fueled “wealth” in the last six months.” This bodes ill for all markets as Central Banks try to encourage spending. Although, as he pointed out, much of that wealth was created on the back of the Central Banks” most reassuring interventionist policies. Policies which, in the USA, investors can no longer depend upon, not after Janet Yellen raised interest rates by a fraction, based on the fact that the U.S. economy showed sufficiently strong fundamentals (employment figures) to merit the (microsize) rate hike.

The hike signaled the end of an era of seemingly endless monetary easing and asset buying provided by the Fed, a.k.a. the “market’s BFF.” The Fed reluctantly became the markets” BFF (Best Friend), Mohamed El-Erian argued on Bloomberg TV, while pointing out this was never something the Fed intended nor desired. Yellen is not the most popular person on Wall Street right now; many have called for her to reverse the move. Yellen’s timing was unfortunate, but is there ever a good time to say, “The party’s over”? Is a reversal conceivable without undermining the Fed’s credibility?

Some developing nations have taken to currency devaluation as a response to decreased global growth. Describing the Bank of Japan’s move into negative rates as “the latest twist in the currency war saga,” John Plender writes in the FT that “The snag in today’s context is that the US Federal Reserve has, in effect, ruled out competitive easing by raising its policy rate in December. The world’s largest economy is thus condemned to be on the wrong side of the rest of the world’s devaluation.”

James Barrineau, an emerging-market debt fund manager at Schroders, said of the Fed’s decision to stop its asset-buying prerogative: “It is entirely possible that the Fed has miscalculated the impact on markets of taking away the punchbowl of quantitative easing (QE).” In the U.K., similar quantitative tightening (QT) is not on the table. A manager of government debt warns that the government will be holding on to some bonds for years until they mature. He added:

“No one thought about the exit strategy for QE. And the more bonds you buy, the more difficult it is to exit.”

IMF research shows bond funds have greatly increased their use of derivatives, and the IMF is pressing for greater transparency by companies using derivatives. European regulators, simultaneously, are about to instigate new bond-trading rules “which would force asset managers trying to sell a liquid bond instrument to disclose what price they are seeking ahead of its sale,” as the FT reports; something compared to playing poker with your cards turned upward. The fund managers insist that mandatory pre-trade transparency will have a “seismic” effect on their business, and will certainly limit liquidity, thereby creating yet another likely “shock” in the bond markets to look forward to.