Your Dad Is Not Hitler 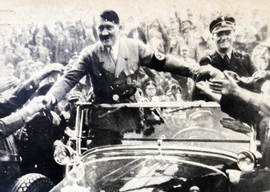 A few weeks ago I noticed the following slogan painted on the walls of a supermarket in France:

One didn”t know whether to laugh, cry, be angry or even pitying: for it is not necessary to be an unequivocal admirer of the former (and possibly future) president of France to see that the analogy is not quite exact, nor illuminating.

To be sure, anything or anybody has features in common with something or somebody else. Both Hitler and Sarkozy were and are short, the latter shorter than the former (actually, President Hollande is exactly the same height as Hitler). Both had two eyes; both spoke”and one still speaks”an Indo-European language. The similarities are endless. Even a discarded woolen glove and an asteroid have something in common: they are both objects in the solar system.

As it happens, on the very day I saw this slogan I read an interview in a newspaper with the author of Reductio ad Hitlerum, a book named after the use of analogy with Hitler or Nazism to draw all discussion about something to a close: for once an argument or opinion is tainted, however unjustly or inaccurately, by analogy with Hitler or Nazism, it is rendered absolutely impermissible, containing within itself both original and continuing sin. It is an accusation from which it is impossible to free an argument. It is like the policeman at a political rally in America who replied to a man who claimed to be anti-communist, “I don”t care what kind of communist you are.” (The joke has been recycled a thousand times.)

“Why should anyone concern himself with my peccadilloes when we are in the midst of a moral catastrophe equivalent to Nazism?”

If you have to protest that you”re not something, that only goes to show that really, underneath it all, you are that something: for if you were not, you wouldn”t have to proclaim it. After all, a bear doesn”t have to go round proclaiming it’s a bear, that it partakes of ursitude; it just is a bear and everyone knows it. Only someone pretending to be a bear would go round saying “I”m a bear.” This means that you are what you are accused of being, provided only that the accuser belongs to that self-selected group (which seems to be ever-enlarging) of people who can tell appearance from reality and were born with original virtue.

The author of the book, a philosopher called FranÃ§ois de Smet, attempts to explain this too ready resort to the reductio ad Hitlerum. But it seems to me that he only partially hits the mark”as, I suppose, would be true of anyone who attempted the question.

My wife, who was with me when I saw the painted slogan, said immediately when she saw it that the young person who painted it (and painting slogans on walls is a young man’s game) must have been ignorant of history.

If so, it seems to me it must have been ignorance of a special kind, not just of the facts. Indeed, it was more likely to have been a failure of the imagination than a brute ignorance of the facts, for even the worst pupil in the worst school, entirely innocent otherwise of historical knowledge as he may be, knows that the Atlantic slave trade and the Nazis were very bad (though he may not know which came before which, or by how long). The person who painted the slogan was most likely a spoiled brat who had never suffered any real oppression himself; he was well enough educated to know something of the Nazi era, but he simply had no imaginative insight into the possible depths or miseries of human experience.

On the other hand, he would probably thirst greedily to suffer, as if envious of those who had drunk at the real well of misery. No one, especially the young, likes to admit that his discontents with the world are actually quite petty by comparison with the terrible sufferings of others, past, present, and no doubt to come; and so he magnifies his own sufferings to make them seem more like those of true sufferers. The minor inconveniences of life under Sarkozy are therefore magnified preposterously and equated to the sufferings of occupied France (which were themselves mild by comparison with those of the occupation of Poland).