Your Genocide Was Bigger Than Mine 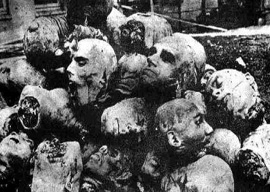 France and Turkey are tossing accusations of historical guilt back and forth as if guilt was a live grenade.

On Thursday France’s National Assembly overwhelmingly said Oui to a bill making it a thoughtcrime to deny or “outrageously minimize” the idea that the Ottoman Turks’ treatment of Armenians during World War I constituted genocide—a word coined in 1943 to describe what Armenians call the “Great Crime” against their tribe. The bill, which will go before the French Senate in 2012, imposes up to a year in jail and a fine of 45,000 euros to anyone foolhardy enough to challenge the state’s formally engraved version of another nation’s historical wrongdoing.

Not to be outdone, Turkish Prime Minister Tayyip Erdogan on Friday swatted the ping-pong ball back into France, accusing them of committing genocide during France’s hundred-year-plus Algerian occupation. The irked Turk accused French President Nicolas Sarkozy of “using Turkophobia and Islamophobia to gain votes.” Erdogan recalled his Turkish ambassador from Paris and immediately froze military, economic, and political relations with France. He said that starting in 1945, the French “mercilessly martyred” 15 percent of the Algerian population, alleging that many victims “were burnt en masse in ovens.” (Before the word “holocaust” was appropriated and virtually trademarked, it generally denoted mass devastation wrought by fire.) The mayor of Turkey’s capital Ankara threatened that if France ultimately approved the Armenian-genocide bill, he’d erect a monument to the Algerian victims directly in front of Ankara’s French embassy.

“In history there are never angels and devils, only winners and losers.”

Whereas France seeks to criminalize denying the Armenian genocide, the Turks have already criminalized affirming it by outlawing the act of “insulting Turkishness.” (In March, Turkish Nobel Prize winner Orhan Pamuk was fined for stating in a Swiss magazine that the Turks killed a million Armenians during World War I.)

When it comes to tallying casualties, the victims always claim a far higher body count than the perpetrators. Numerical claims about the reputed Armenian and Algerian genocides mirror one another almost precisely. Armenians say their death toll was 1.5 million, while the Turks lowball it at around 300,000. Algerians say the French slaughtered around 1.5 million, while France shrugs and says it was a mere 350,000.

The historical record suggests that both France and Turkey engaged in significant nastiness. It also suggests that neither the Armenians nor the Algerians were entirely innocent, either. French apologists note that Algerian nationalists were less than lamblike in dealing with the French, while the defenders of Turkishness allege that Armenian nationalists colluded with Russia against the Ottoman Turks in WWI. In history there are never angels and devils, only winners and losers.

TURKISH TREATMENT OF ARMENIANS IN WORLD WAR I
For centuries, Armenian Christians had been redheaded stepchildren in the Ottoman Empire, relegated to second-class dhimmitude. As the empire was crumbling and Turkish nationalism emerged in its stead, Turks began slaying Armenian infidels en masse. An estimated 100,000 to 300,000 Armenians were slaughtered in the Hamidian Massacres of 1894-96, while another 15,000 to 30,000 were snuffed in 1909’s Adana Massacre. With the emergence of the Young Turks movement and WWI’s outbreak, the pogrom went pro in 1915. “Butcher battalions” corraled hundreds of thousands of Armenians into dozens of concentration camps, forcing them into death marches toward the Syrian Desert’s scorched earth.

Turks allegedly loaded Armenians onto barges which they intentionally sank in the Black Sea. There were reports of entire villages being burned alive. Turkish physicians were accused of deliberately murdering children by injecting them with morphine overdoses and of purposely inoculating Armenian civilians with typhus. There are at least two reports of Armenian children being liquidated in school buildings with toxic gas.