Your Parents Are Weird 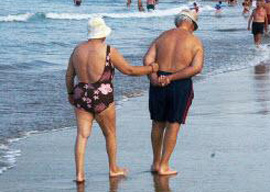 During this cozy holiday season it’s worth taking a step back from the football game and having a good hard stare at the baby boomers who made you. What is with these people? They live in giant McMansions but make sandwiches that are just a bun with some margarine and a slice of baloney. They say we’re slaves to our phones, but they leave the TV on in the background all day. Oh, and their jeans don’t fit. Here are 10 other things I’ve noticed about your in-laws:

1. THEY PREFACE EVERY NOUN WITH “THE”
What’s with all the THEs? Hey, old people, when you call them “The Gays” you sound as clueless as George W. Bush when he said he pulls up maps on “The Google.” I can’t confirm this because the Internet sucks here (yes, I’m at my in-laws, too) but I’m almost positive I heard John McCain refer to Pakis as “The Paks” and could swear I heard Obama discuss “The Twitter.” I know for a fact that Donald Trump got in hot water recently for saying he’s good with “The Blacks.” It’s an annoying habit of which I’d like to see “The End.”

2. ALL LIGHTS HAVE TO GO OFF AT NIGHT
Boomers are rich now, but they grew up poor under the tutelage of feudal taskmasters who had just survived the Depression. Leaving the door open for half a second too long meant you were heating up the entire street, and using air conditioning in the car was tantamount to throwing money out the window. Some are looser with money than others, but not a single old person in the world will allow you to leave the lights on at night. Why? It costs about ten cents. I’d gladly foot the bill if it didn’t mean I have to feel around the house like Helen Keller for the two hours I’m awake after you go to bed.

“They break their toes and fall down stairs to save pennies on electricity.”

3. THEY HAVE DISHWASHERPHOBIA
Their parents scarred them into thinking any big machine that does your work for you kills starving children all over the world. So they sit slumped over the sink using more hot water and energy than the dishwasher sitting at their feet.  Even worse, when you physically force them to use their own dishwasher, they cannot figure out how it works and lay the dirty plates facing away from the jets. Why do I know how to do this and they don’t? I didn’t take a night course in dishwashers. I didn’t even grow up with one. I just saw where the jets are and figured it out. How is it they can design an optics system for military helicopters but they can’t figure out the “regular wash” button is what you push for a regular wash?

4. THEY CAN’T FIGURE OUT THE REMOTE
It’s the same with the TV remote. Hey, mom, you know how you get to the On Demand channels? You push the giant green button on the remote that says “On Demand.” They ask you how to use the DVR because they want to record The Amazing Race, but they obviously haven’t even looked down because there’s a big red button that says “REC” on it. That’s short for “Record.” Nobody told me that. I sussed it out using my gigantic brain.

5. THEY ARE PASSIONATE ABOUT SUDOKU
Maybe they’re obsessed with this game because it helps them gauge their impending senility. If they find the advanced one harder this week than they did last week, the decline has begun. Same goes with the crossword puzzles. Do you know a five-letter word for “The first name in eroticism”? Me, neither. Who cares? I’d rather use my brain for figuring out real things in real life that I can really use. To putt facts around in my head and lay them out on a grid that gets tossed in the garbage is the kind of hobby I’ll get to about 2,000 years after I’m dead.