You’re Not Allowed to Laugh at That! 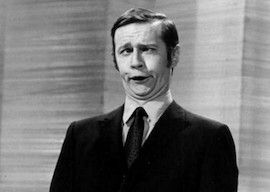 RALEIGH, N.C.—The stand-up comedy stage is the last place where you can speak without a filter.

Or at least I always thought so.

People are bringing tape recorders into workout clubs to make sure comics don’t “cross over the line.” That would be the Speech Code Line, the one that dwells within the active imaginations of humorless graduates of Sensitivity Training Class. We used to have a motto: “The job of the comedian is to define where the line is, and then deliberately cross it.” Good luck with that today. Someone in the audience might just be a Kamikaze Safe Space Warrior, a person being repeatedly triggered on purpose in an act of self-sacrifice for the greater good.

Yeah, I know—in one sense it’s nothing new. I’ve heard all the stories about Lenny Bruce, how the cops nailed him in a Greenwich Village club for saying the word “cocksucker” and then the authorities hounded him all the way to jail, an experience that pretty much broke his spirit.

And yeah, I know how George Carlin’s “seven dirty words” routine got trundled up to the Supreme Court by humorless moral scolds.

And yeah, I know how Gilbert Gottfried lost his job as the Aflac duck because he made Japanese tsunami jokes. (That’s the best you could do on offensive Gilbert material? The man anchored the Friars Club roasts for years. If the greatest comedians from both coasts had a life-or-death dirty-joke contest, Gilbert would be the sole survivor—he can tell jokes that make Andrew Dice Clay puke.)

It’s almost like Lenny Bruce and George Carlin made the stage safe for any vile thing you wanna say, so self-appointed censors started finding offstage reasons to heckle comics out of existence.

There used to be a foolproof standard for anything said on the stage:

If they laugh, you can say it.

And it’s a pretty good rule because it eliminates all discussion about good taste, bad taste, off-limits topics, and it puts the comedian in the position of having to constantly outmaneuver the audience’s expectations, which is sort of the definition of comedy. Daniel Tosh has a whole section of his act in which he deconstructs the frequent battle cry of the moral crusader: “But there are some topics that can never be funny. There are matters that are beyond joking.” He then proceeds to tell jokes about rape, dead babies, and other topics that he gets away with because…the audience laughs in spite of itself. People are trying not to laugh but he’s identified some startling central truth that makes it impossible to keep a straight face. It’s not the subject matter, it’s the context, as any good comic knows.

That’s why it was ridiculous in the early ’90s when people who had never seen Andrew Dice Clay’s act started movements to bring him down. He was doing what used to be called “blue comedy” of the type made famous by Redd Foxx in after-hours clubs—intentionally dirty material, mostly about sex—but he was branded a misogynist by people who had never seen his act. They just read the jokes in print or watched a short clip of his nasty nursery rhymes. Dice was selling out shows at Madison Square Garden for audiences who did think his material was funny, but he was brought down by people who would never go to one of his shows and for whom, I’m quite sure, the material wasn’t funny.

“The stand-up stage is a pulpit. It’s a place for secular preachers.”

The material doesn’t have to be funny for 100 percent of the population!

You can have jokes that are funny to Scots but not to Irishmen. You can have black humor, brown humor, feminist humor, lesbian humor, sexual humor, nasty political humor, and each comic will find his audience while offending people who don’t like him and would never patronize his shows. This is the way comedy works—it’s destructive, it blows up pretension, it vaporizes conventional wisdom. It offends.

But now, for the first time in history, we have every comic living on a knife edge, one joke away from being banished to Moral Scold Jail.

The stand-up stage is a pulpit. It’s a place for secular preachers. They reveal things to us about ourselves that we would rather not have revealed. They go deep into the hidden parts of our subconscious and, like unclogging a drain, unearth all the gross crap down there. It’s exhilarating for people who are self-aware and deeply offensive for people who are self-protective. There’s a reason our president won’t attend the annual White House Correspondents’ Dinner—he’s not only incapable of self-deprecation, he may be incapable of laughter itself. A lot of his fans have the same missing brain lobe. When Kathy Griffin had her picture made holding the bloody head of Trump—a “burning in effigy” gesture made possible by modern special-effects makeup—they actually believed she was advocating cutting off his head. The literalist is the enemy of all humor.

In the early years of America, when preachers could be imprisoned for blasphemy, we developed the idea of the pulpit as a protected free-speech area. Almost every society in the world has some version of this. England has Speaker’s Corner in Hyde Park, where you can supposedly say anything without repercussions, with the sole exception of insulting the monarch. (They give a very practical reason for this restriction: The queen has no right of reply.) Various universities have designated a particular tree, square, quadrangle, or lawn as protected areas for idiosyncratic expression. But our place, in the latter half of the 20th century, was always the comedy stage.

Earlier this year Louis C.K. was working out a show at Governor’s Comedy Club on Long Island, and some of his jokes were takedowns of the Parkland High School survivors. I don’t know whether the jokes worked or not—history hasn’t recorded whether his experiment was successful—but somebody recorded them and posted them so that he could be portrayed as a vindictive bitter hateful specimen of a human being. (The reasoning here was that, because he had previously been outed for sexual abuse, he shouldn’t be allowed to work at all.) Dave Chappelle has been similarly stalked by “gotcha” police. Michael Richards was basically drummed out of stand-up after someone recorded some racist barbs directed at hecklers at the Comedy Store in El-Lay. Even Jerry Seinfeld, who does nothing very close to the edge, says he’s afraid to work universities. And the policing of comedy has crossed the ocean in recent years. Konstantin Kisin, a Russian-born Brit, had to pull out of a show at the School of Oriental and African Studies in London when the school asked him to sign a “behavioural agreement form.” Listen to this language:

By signing this contract, you are agreeing to our no-tolerance policy with regards to racism, sexism, classism, ageism, ableism, homophobia, biphobia, transphobia, xenophobia, Islamophobia or anti-religion or anti-atheism.

The only one they left out is “banana-on-the-sidewalk-ism,” but they could probably sanction you for that joke under the “ableism” clause. Kisin, who grew up in the Soviet Union, noted that he’d seen this kind of document before, in a totalitarian state, and once was enough.

Comedians have to tell bad unfunny jokes in order to know that they’re bad and unfunny. Posting their rehearsals on Facebook is the equivalent of posting a “Before” picture of a fat person embarking on a weight-loss program. But the goal of all this self-righteous posturing is to bring these guys in line.

Sofie Hagen, the Danish comedian and “fat acceptance campaigner,” told The Guardian that all comedians should simply erase everything potentially offensive from their acts because there are many comics “who manage to say a lot of things without repercussions; who are really, really funny while doing it. It sometimes takes a bit of extra work; you have to be aware of your own privilege and you have to educate yourself so you don’t use damaging language.”

Apparently Sofie never heard the “find the line and cross it” speech. Apparently she doesn’t care about the Lenny Bruces and George Carlins and Paul Mooneys of the world who set off nuclear bombs on the stage so that the world will be freer. (Paul Mooney tells explicitly racist jokes in almost every set he does.) Apparently she thinks that people who use “damaging language” on purpose are beyond redemption and should be banned by the people.